In my never-ending pursuit to deliver rigorous financial information in a very dry and straightforward manner, I bring you the third installment of the ongoing investigative series: Great Trash Finds.

Today I am publishing the research I conducted into my sister’s trash. Specifically, the stuff she’s pulled from the trash. As you may recall, the last edition featured my parents’ epic trash discoveries, so we’re trying to keep it in the Frugalwoods family. I’ll have to coerce my brother and his wife to send me photos of their trash next (because I know they have some choice finds). Best part about this is that I periodically receive texts from various family members of random objects they’ve pulled from the trash. My favorite are the texts from my mom, which are usually apropos of nothing and not accompanied by any explanations.

Here at Frugalwoods we are huge proponents of taking discarded items–it’s frugal, environmentally sound, and fun! You better believe Mr. FW and I go trash huntin’ for entertainment (doesn’t everyone?). And you wondered how we have a $0 entertainment budget!

My sister (who has selected the apt moniker “Frugal Sister”) and her husband are some fellow frugal weirdos living an awesome life in semi-rural SoCal with their three adorable kiddos, an unknown number of chickens, many grape vines, numerous gardens, and one big ol’ dog. I’m trying to entice her to write a guest post on frugal kid tips, which I’m hoping she’ll do as she’s 1) hilarious 2) frugal 3) not going to charge me for her content… yet. Win!

And now, for Frugal Sister’s Top Trash Brags (that she can remember and could locate to photograph) 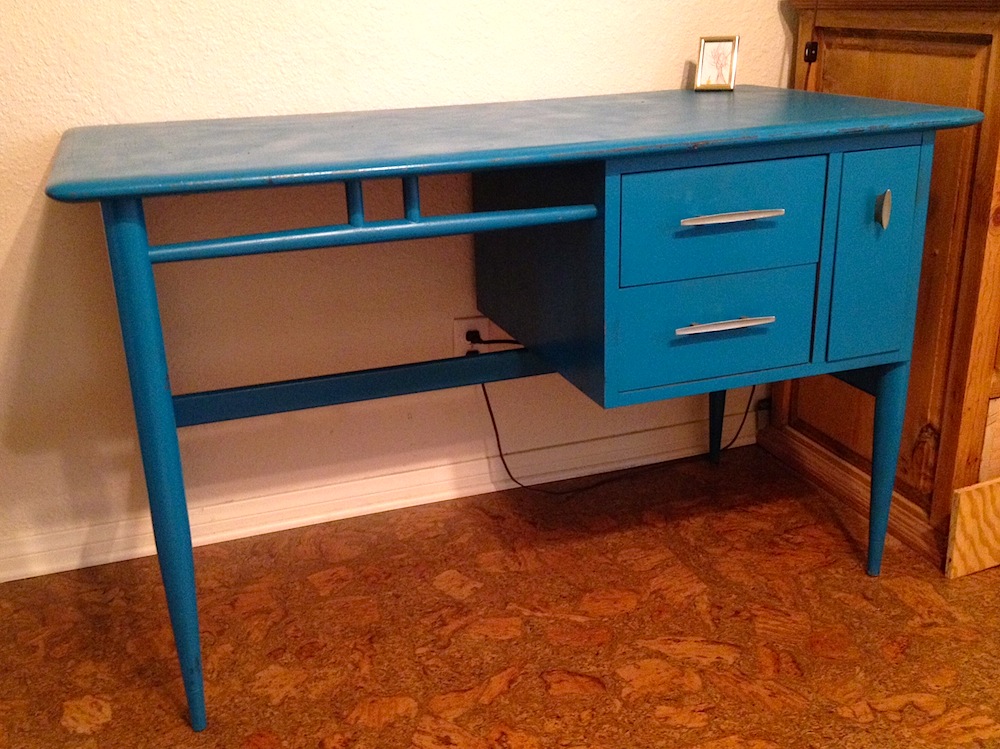 I’m a desk! Take me outta the trash!

Love this color and the design. Can’t believe someone would deign to trash such a fantastic piece of art! Side bonus: this desk sits atop the cork floor my brother-in-law installed in several rooms of their home. Another DIY hero in our midst. 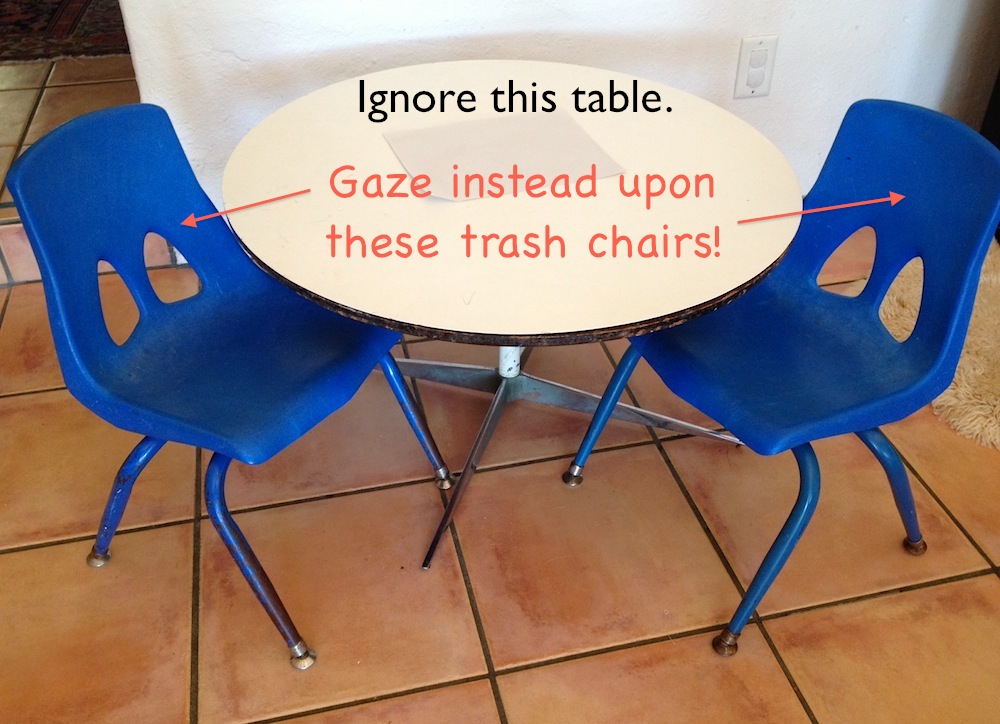 Ignore the impostor table and focus on the wonder that is these fabulous kid’s chairs. Even Frugal Hound could fit in a chair like that (she’s asked for one, but I have yet to see any in our trash here). 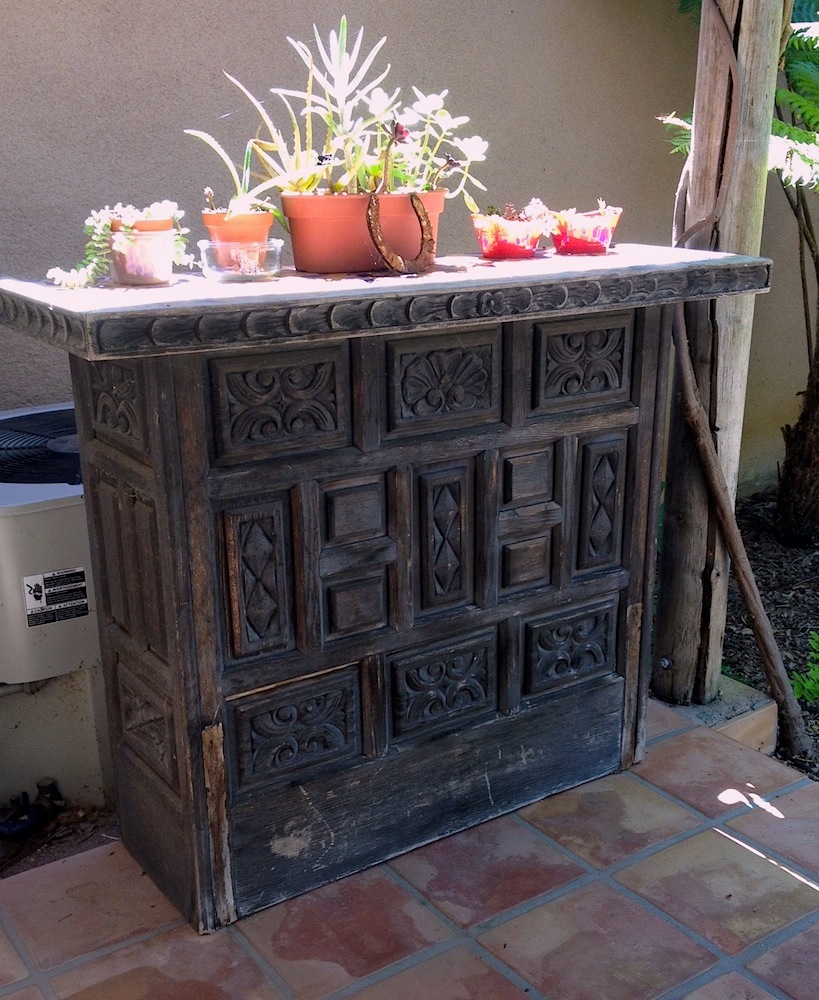 Frugal Sister and brother-in-law located this beaut of a bar abandoned in an alley. They re-tiled the top, making it a gorgeous outdoor entertainment piece. Bonus is that it cleverly conceals their air conditioner! 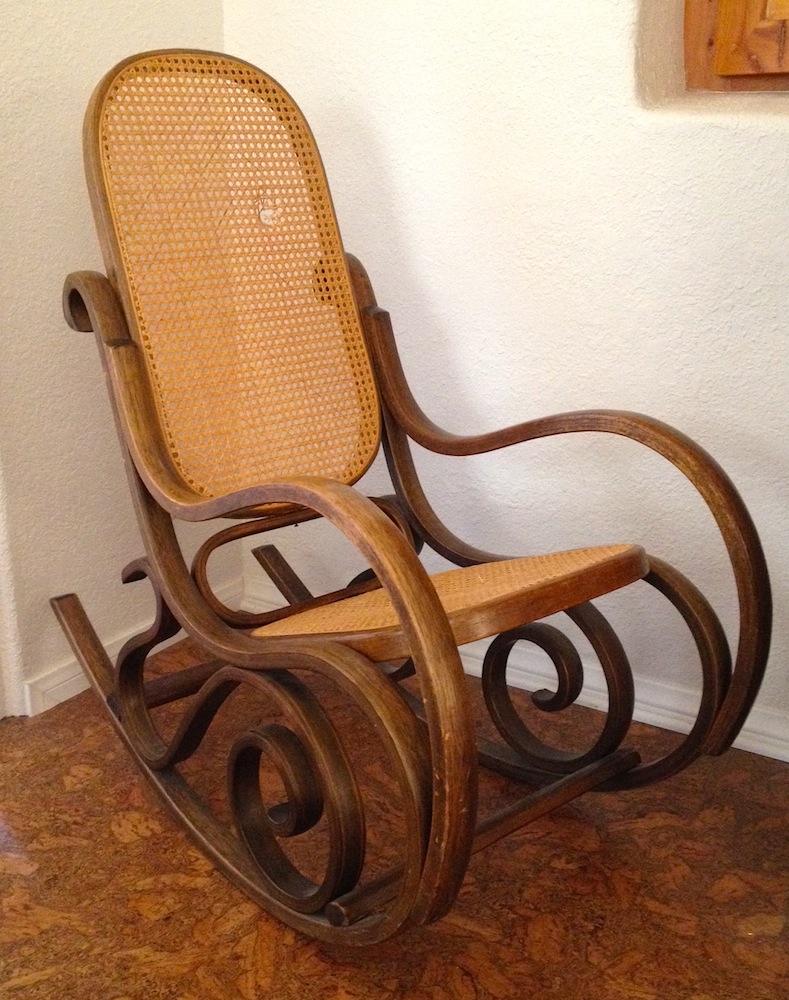 Rocking is better when it’s free

Now this is a rockin’ good trash find. You might even say it rocks.* Plus, check out more of my brother-in-law’s handiwork with cork flooring.

Four fabulous mid-century modern chairs my brother-in-law rescued from a dumpster. They use these along with a table as their kitchen set. Trendy and trashy. Love it. Bets on how much these chairs would be at a hipster, mid-century modern shop? Expensive. Let me just tell you that they would be expensive.

*Sorry about that last one, not gonna lie, I’ve been drinking boxed wine.

As I like to do with each Great Trash Finds installment, let’s recount the things you all found in the trash–and subsequently shared with me.

No More Waffles finds bikes. Multiple bikes! I could really use a new bike, so maybe I’ll head over to scout his Belgian trash.

Reader ThriftyD found a window box fan, which works just swell. Best part? He’d been in the market for a fan for 6 months but being a frugal boss, held off on purchasing. Sure enough–a dumpster delivered! Now there’s a cool trash brag.

Will at First Quarter Finance found a piece of luggage. With money inside! Double trash brag.

Shannon from Financially Blonde and Kassandra from More Than Just Money haven’t found anything good, but they’ve both supplied some choice pieces of trash. I’m currently camping outside of their houses to see if they’ll throw out anything else.

Alicia from Financial Diffraction takes her neighbor’s empty beer bottles to redeem for cash. She admits to doing this in the dead of night, which I highly approve of.

Nicola from The Frugal Cottage found a £5 note on a beach. Woo hoo!

Lauren from The Write Budget also keeps it all in the family. Her mom found a nice dresser, which her sister is now re-painting. Love the upcycle!

Femme Frugality has a friend who finds TVs. I wonder if they watch trash TV?

John from Frugal Rules found a fully-operational bike for one of his kids. Score!

Ryan from Impersonal Finance’s favorite finds include an exercise bike and a TV stand. It’s the latest trend in exercise–bike while bench pressing a TV stand.

Leah from Penn receives a bonanza of excellent trash thanks to her residence in a dorm. The best? Columbia snow boots that fit her husband perfectly.

Laurie from The Frugal Farmer shares that her brother, a trash hauler, locates all kinds of fabulous things, including lots of electronics!

Deb from Debt Debs found a toy rocking horse for her grandson. Another rocking good find!

Your turn! Quick, what’s the funniest item listed on the first page of your local Craigslist’s free section?

Currently on the Boston Craigslist Free section: Free Wedding Chuppah and Free Reptile (of indeterminate species).  What could go wrong?