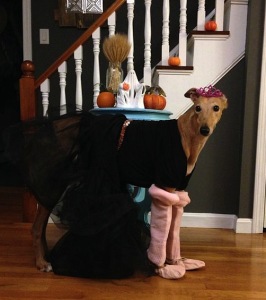 This is absurdly embarrassing. I don’t even like ballet.

Frugal Hound here. It has come to my attention (namely through today’s interview) that not all dogs are required to dress-up and/or wear coats. I feel I’ve been duped, tricked and otherwise offended/anthropomorphized by my humans.

Something must be done. Greyhounds should not wear clothes! For evidence of contrary practice by my terrible parents, look no further than this embarrassing photo. I post this not for the sympathy, but to raise awareness.

And on that grave yet hopeful note, I introduce Angel, the darling (and non-clothes wearing) husky of Even Steven Money. I hope you’ll join me in thoroughly sniffing Angel!

I’m a Siberian Husky named Angel. Although from time to time they call me Angelica (from Rugrats) and Angelita (pretty sure my Mom is Spanish). My parents are Mr. and Mrs. Even Steven Money, but I don’t usually call them that…. 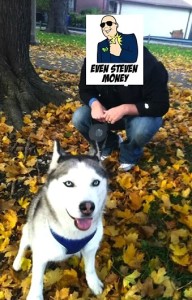 Well the first frugal thing they did was getting me from a rescue; they didn’t have to worry about how expensive I’d have been if they’d gotten me as a puppy–which is good thinking in my book. I know they go to Costco to get all my tasty food and buy treats in bulk, plus every once in awhile they give me these amazing soup bones that are way cheaper than the store. I’m pretty sure they give those to me because I’m awesome.

Oh boy but I love so many things! When my parents cook they love to give me green pepper and tomatoes–those are fantastico (see I told you my mom was Spanish). Also, Mr. Even Steven likes to snack on sandwich meat, I think he calls them air sandwiches, what a silly name, why would anyone eat air? Anyways I make sure to run as fast as I can once I hear the plastic baggie open because that means I get at least one air sandwich. 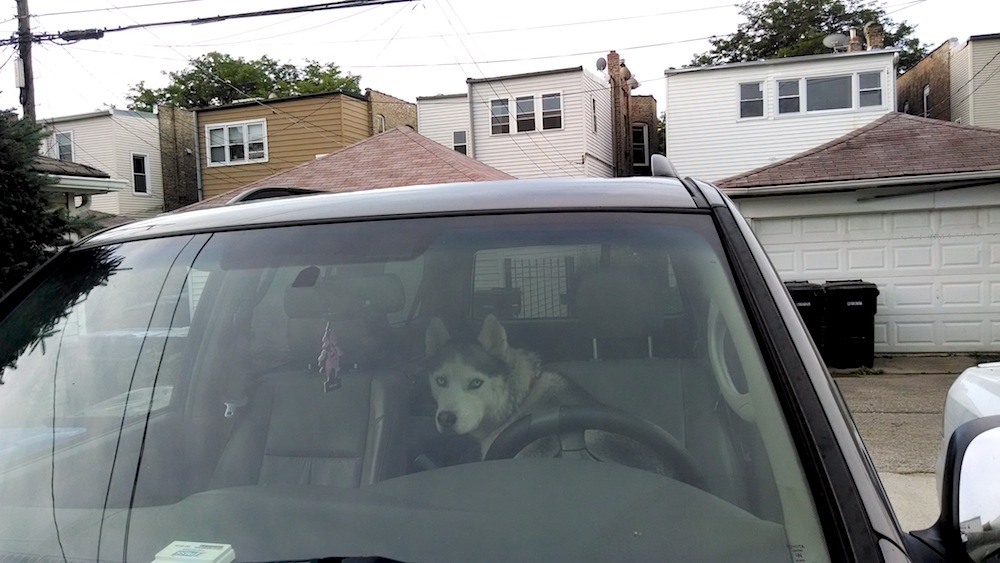 Favorite toy, you know great question, thanks for asking. I like to keep it simple, I don’t need some fancy squeaky toy; I’m old school you know. I prefer my tennis ball and my frisbee. I really like to chew them up as much as possible. I mean if you want to throw them I’m not opposed, but… chewing them is my thing.

Mrs. Even Steven Money happened to be walking me during the winter time, there was some snow, some ice, and for some reason I saw something shiny… It could have been a squirrel, maybe a rabbit, but I was going for it! I think Mrs. ESM wanted me to be free–at least based on the fact that it was just me and the leash chasing the shiny object. Mrs. ESM laughed or cried a little, hard to tell since I was down the street, but everything worked out. I ran up to some nice people at the local bar, they made a phone call and a few hours later I was back chilling on my bed. What’s great is that sometimes, they just let me free–well, me and the leash, but Mr. Even Steven he’s getting smarter, no phone calls needed… great guy I think you guys would like him. 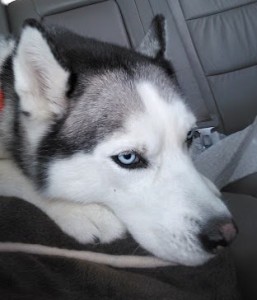 I am bathed about twice a year, but I am not a big fan of these things you refer to as baths. I don’t know if it’s the soap, the water, the scrubbing, but it’s the 21st century and I should have choices and my choice is: no baths! Viva no baňarse! Oops, I forget you guys might not know Spanish: Long Live No Baths!

My family’s financial plans are to retire early. Mr. Even Steven talks about it all the time and you know what, I support him. I mean, when he stays home instead of going to work, I get to walk and take such long adventures, so early retirement is Angel approved. I think the number one way I contribute are through fun family activities with me! Like going for walks to the park and going to Lake Michigan–you wouldn’t believe how many dogs are there–good times had by all. But yeah, it’s all free! Plus we both get in shape, me with my girlish figure and the main man, just keeping that guy moving is good for him. 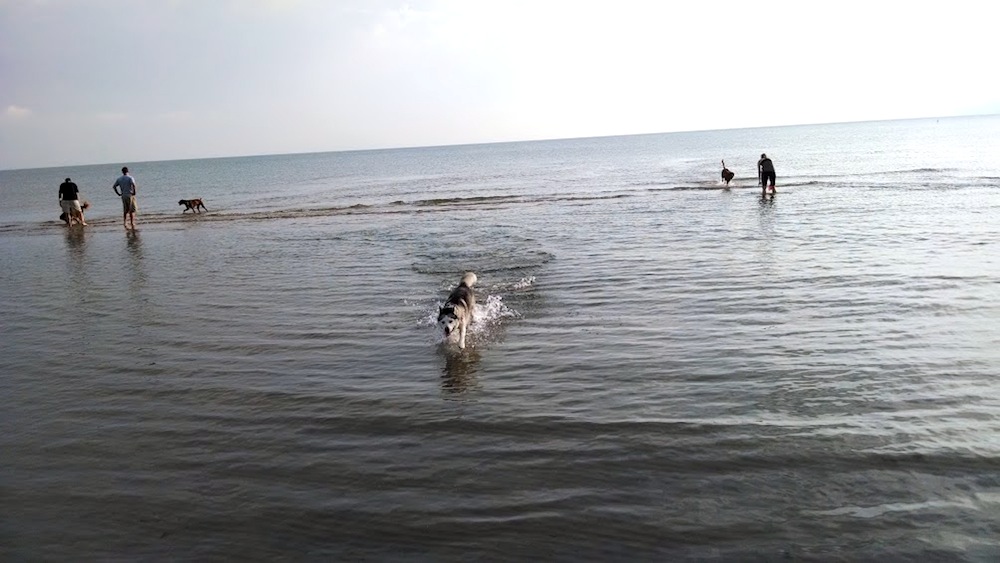 Mr. Even Steven calls me a diva, but I’m not sure if that’s a skill. So I’m going with my ability to find food. It doesn’t matter if its buried under 3 feet of snow, I will sniff it out and BOOM, I’m eating pizza. I need to stay on top of my game, I mean you never know when snow is going to come and we might need some food, although I always have food in the house, so maybe I don’t need the pizza? That’s crazy talk, but I had you guys going right?

10) Do you have any outfits you like to wear?

I’ve seen other dogs out there with jackets and boots and all sorts of stuff, but not me. I mean, have you seen my fur? If you had this fur would you cover it up? I mean come on. Mrs. Even Steven tries from time to time, but the Mr. quickly takes it off because he knows. Like I said before, smart guy… make sure to check him out at Even Steven Money or on Twitter.

Thanks again for the interview, Frugal Hound! I’m hoping this leads to big things for me, I figure first this interview, then commercials, maybe Alaska, who knows where this crazy world is going to take me. 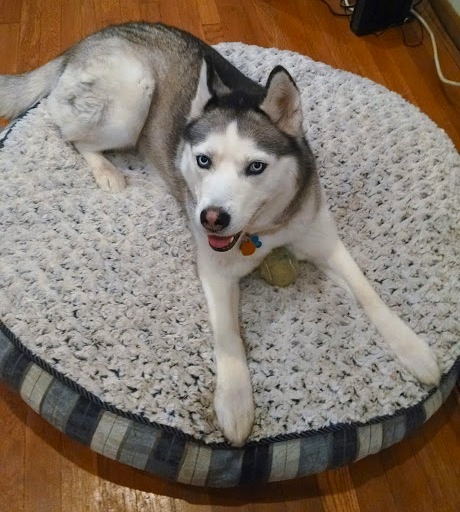 Thank you, Angel! Why hide that glossy coat of yours indeed! If only my parents were as wise as yours with regards to dog wardrobes…

Mrs. Frugalwoods here: Many thanks to Even Steven Money for assisting Angel with her hilarious, and lovely, interview. Even Steven Money is all about Even Steven’s  journey to paying back all of his debt, becoming Even Steven, and reaching financial independence to retire early. Mr. and Mrs. Even Steven are paying off the last of their student loans and working their Frugalwoods off to get there, throwing overtime, bonuses, tax refunds, stocks, eBay side hustles, and just about anything else they can get their hands on to be debt free. Don’t be fooled by the student loans, they are on their way to financial independence and early retirement through their retirement investments–predominantly their real estate investment properties.