Frugal Hound, your faithful pet interviewer, reporting for duty. Today it is my distinct houndy pleasure to bring you a sniffing of not one, not two, but THREE interview subject of the cat varietal.

I consider my access to these fair felines to be wonderfully indicative of my reputation for trusted, non-eating journalism. These three cats hail from KaliHawlk.com and were a true treat to interview.

Hi! We’re Sophie, Stormy, and Scout, and we rule the roost at the Hawlk residence. Our mom is Kali of KaliHawlk.com, and she and her human, Kevin, adopted us all as 7 week old kittens. We’re now 2 years old and a lot bigger than we used to be.

Sophie is the princess and the diva. She’s the tabby. She can be sweet with Mom, but pretends other humans don’t exist.

Scout is the loud-mouth in the tuxedo. Someone told our parents that tuxedo cats are talkers, and he lives up to that.

Stormy is the gray and she’s a little more reserved if anyone other than Mom and Dad are around. But when it’s just her and our parents, they say she has the most personality. (But we all have a ton of personality. We’re not your typical felines!)

Our mom has no shame in admitting that she spoils us. We get fancy food and fancy cat litter and fancy treats. But she’s very good about shopping sales at Petsmart and using coupons. We cost the household about $50 per month to take care of. Not bad for the three of us. 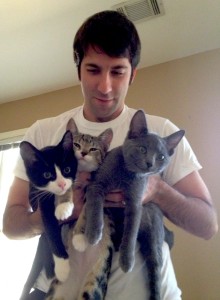 Where Mom saves the most is in allowing us to be spoiled indoor cats. Because she doesn’t boot us out the door, we don’t need special flea medication, yearly vaccinations, and we’ve never had to go to the vet (after we got our initial round of shots as kittens, and “got fixed;” we don’t remember much of that but we’re told we stumbled around like drunks for most of the day when our parents brought us home from that one thanks to some extremely strong painkillers).

We have to pick one favorite? Let’s do three, since there’s three of us here:

We come running and always line up in the same order every time we hear the cheese drawer open in the fridge, or the treat bag rattle, or the tuna can open. Stormy will even give Mom a high-five if it means getting an extra morsel. Show off. 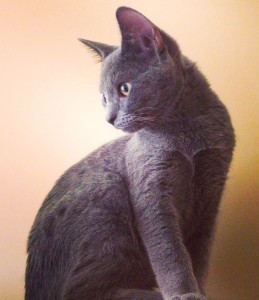 We’re not complicated. Boxes are always appreciated. Stuffed mice are fun to play fetch with. Any moving string is subjected to a good pouncing. And we have a special stuffed animal that’s about our size called Frog. We like to drag him around from room to room when the humans aren’t looking so he always shows up in a different place.

The couch. Our parents have a couch that was a hand-me-down from the people that call us their grand-kitties. We figured it was a challenge when we realized it had withstood 17 years of other cats and dogs and one human kid. We’ve managed to shred the sides of it and tear a hole near the back.

We have a cat tree, scratching post, and plenty of other toys to use to give our claws a good workout — including an old chair that was in way worse shape than the couch — but we figured the couch needed some love too.

Mom and Dad have said the time has finally come to replace it soon and have already threatened us with the squirt bottle if we lay a claw on whatever new couch comes in. We’ll see who cracks first.

Every time our parents call one of us by anything other than our proper names. Sophie is called “Sofa” because, well, she was the teeniest, cutest little kitten and then, well, let’s just say she put on the freshman 15. Stormy is often called Stormageddon because Mom and Dad are dorks and like watching something called Doctor Who. But she can also put on a really mean face and “give eyes,” and when that happens they refer to her as The KGB Agent. And Scout has a whole list of nonsense names, including Scouter and Clam Chowder. 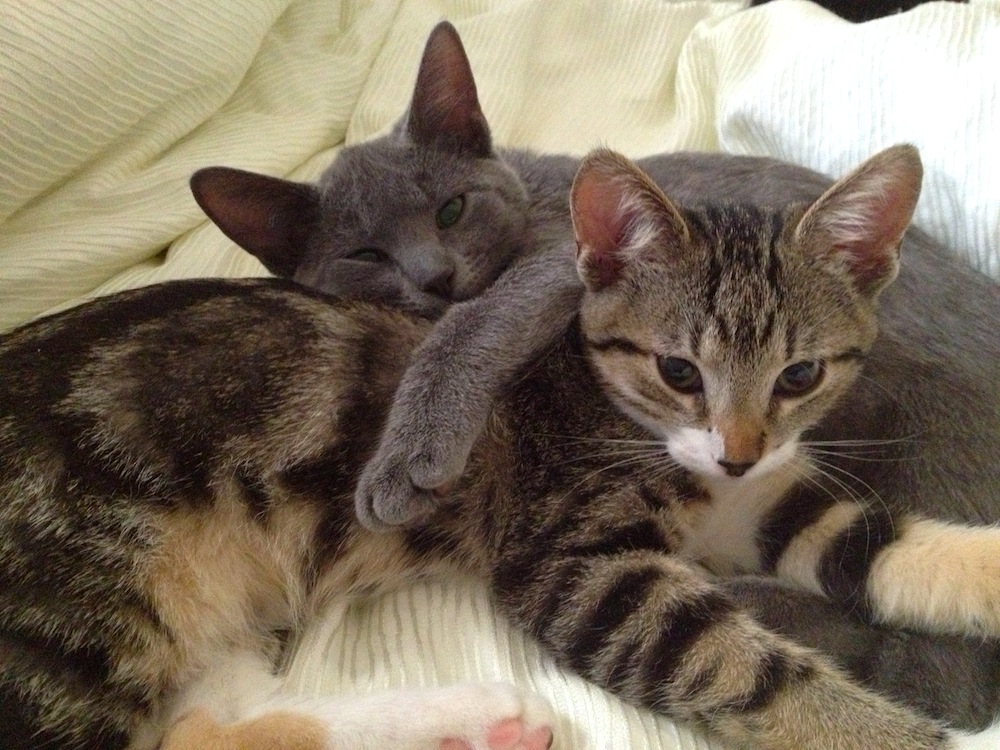 It seemed like the humans never stopped bathing us when we were kittens. We were adopted from an animal shelter, so we had fleas when they brought us home and the baths helped get those annoying things off. But we also got into more messes when we were little — including that time Scout jumped into a toilet that Mom was trying to clean.

We don’t get baths much now, but we don’t mind water. We like when they turn on the tub and we can drink water from the faucet. 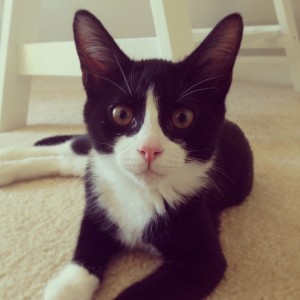 The family plan is to reach our version of financial independence within 8 years or less. Neither one of our parents want to stop working (and that’s good, they need something to do or else they’d drive us crazy), but they don’t want to be obligated to make a certain amount of income every month because they’ve got to save for their future retirements.

In other words, the financial plan is kinda complicated because it’s a little different than the straightforward goals most other humans have. Here’s what we’ve overheard when they sit down to talk about money:

Does that make sense? We only get about half of it, but we’re not the financial pros here.

Oh, and we contribute by forcing our parents to think practically. They can’t just up and leave us so they have to plan ahead and think about that stuff. Mom’s a little hot headed, so we slow her down. Dad says that’s a good thing.

Making our parents happy and making them laugh. We regularly interrupt Mom’s workday since she works from home. We demand treats, or playtime. Sometimes she says she doesn’t have the time but she always caves. We always know when the humans are sad or upset and need to laugh or just need something to hug. We always make ourselves available for snuggles or we entertain them by acting crazy.

We make the house a home! 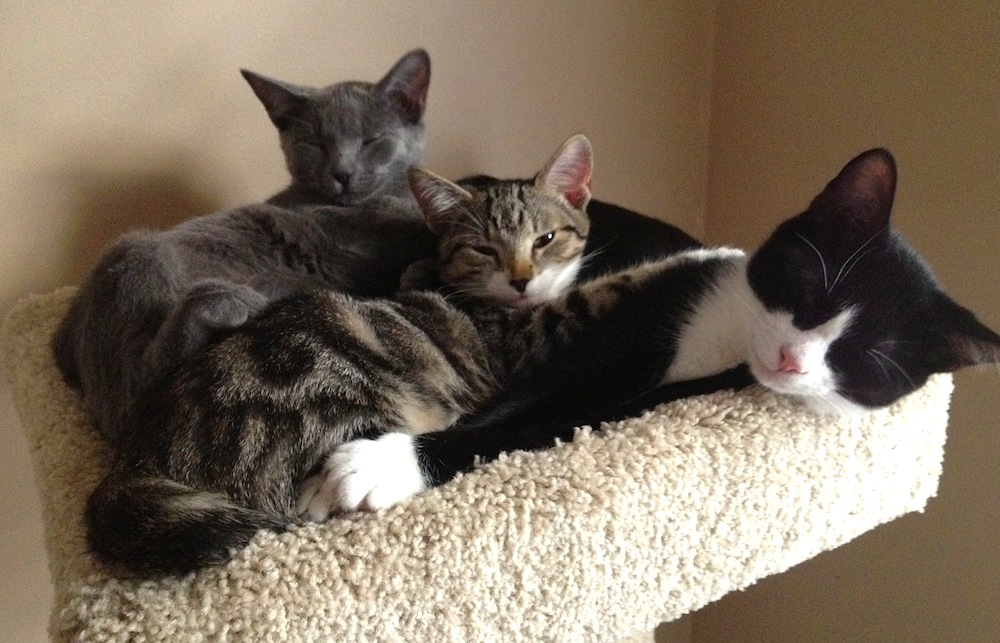 Thank you, cats x 3! I confess that I too give a high-five for not only treats, but for my very meals. The degradation is unspeakable as is the fact that my parents laugh every single time I do it. It’s a tough life we pets live and I’m thankful to you for illuminating some of the more challenging aspects, such as ridiculous nicknames and baths!

Mrs. Frugalwoods here: Many thanks to Kali Hawlk from KaliHawlk.com for assisting her feline tribe with their lovely interview. Kali Hawlk is a financial writer and the marketing manager for XY Planning Network. When she’s not hanging out with the world’s best financial planners, she’s focused on mentoring underemployed and underearning Millennials so they can do more with their money and careers. You can find her on Twitter @KaliHawlk.