Thanksgiving Is The Gateway Drug To A Leftover Loving Life 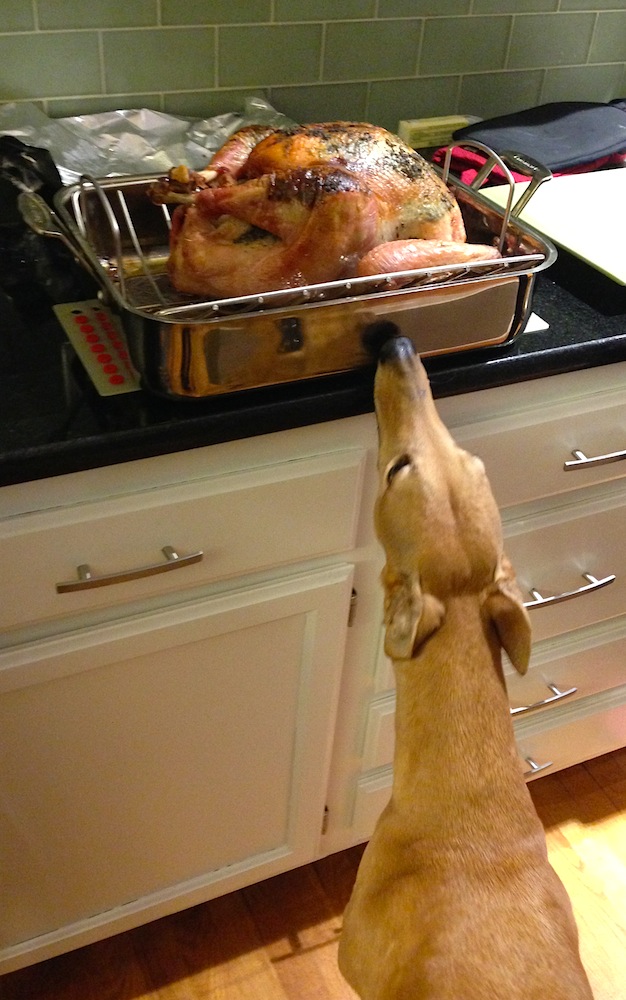 I typically don’t take a militant stance on anything because we all have different goals, circumstances, backgrounds, and financial situations. However, there is one thing about which I am a vehement, diehard evangelist and I’ll rage on if given half the chance. This lightening rod issue that’ll cause me to shed my otherwise accepting, egalitarian self? Leftovers.

There is only one appropriate way to deal with leftovers: by eating them. You can freeze them, store them, save them, or consume them the next day, but they must be eaten. Short of a leftover possessing a known food-borne illness (and it better be a bad one), leftovers are never to be thrown out.

I know this is extreme. I know it’s hardline. I know this isn’t the normal, non-judgmental Mrs. Frugalwoods, but people, we have a serious food waste issue in this country. And, as so often happens with waste, this blatant disregard for our natural resources translates into a very real drain on our finances.

Thanksgiving Day: When Leftovers Are King

Thanksgiving, which we Americans celebrate later this week, is a holiday nearly synonymous with leftovers. And often, these leftovers are heralded as welcome components of the festivities. For the past three years, Mr. Frugalwoods and I have hosted his family for Thanksgiving, which we absolutely love doing. Mr. FW cooks up a big ol’ turkey along with homemade cranberry sauce, gravy, biscuits from scratch, a shredded brussels sprout salad, sage sausage stuffing, and hand-mashed potatoes. I bake pecan pie and pumpkin cake along with his family’s traditional Shoo Fly Pie, which we eat for breakfast. 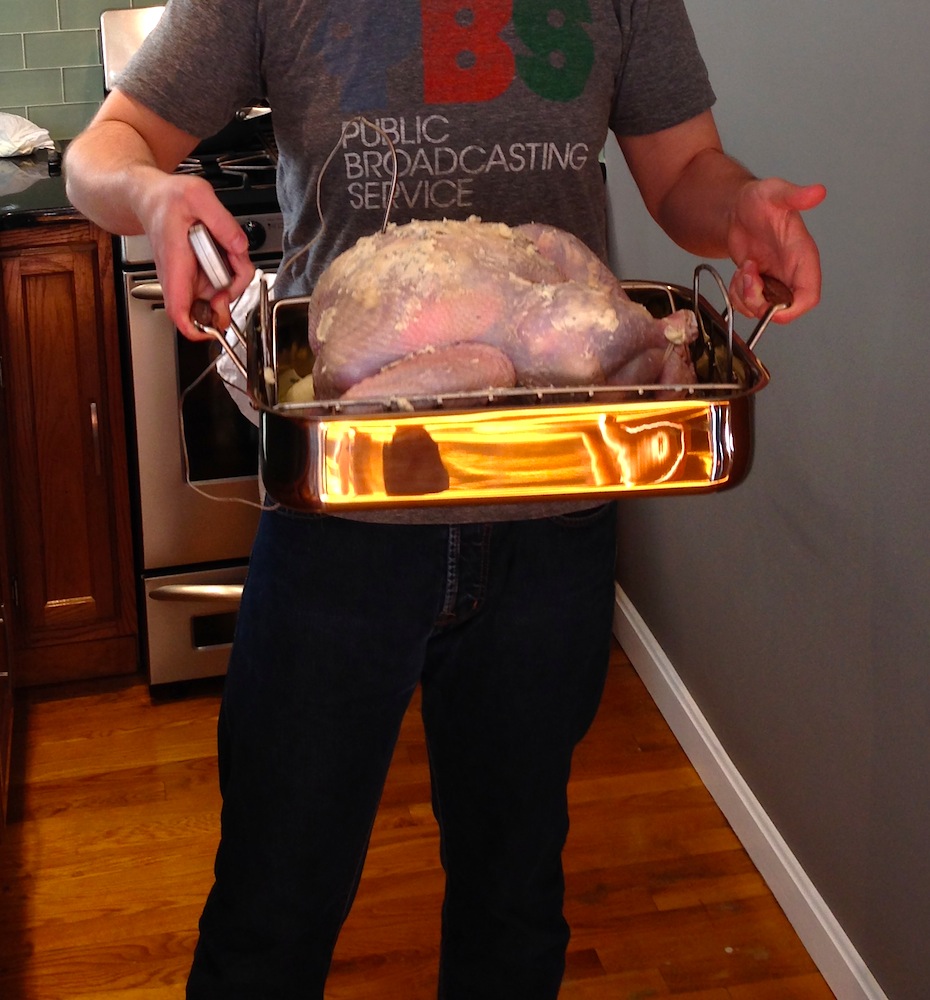 It’s a panoply of incredibly delicious foodstuffs and we cleverly repurpose all of it into leftover meals for weeks. Chiefly, we eat the Thanksgiving banquet for the entirety of my in-laws’ visit–every lunch and dinner is comprised of Mr. FW’s delectable work. He puts a great deal of effort into preparing the feast and so it’s only right that we enjoy it on repeat. Anything remaining after six people have descended upon it with forks drawn is portioned out and frozen for future consumption by Mr. FW and me.

This year, since Babywoods is due the day before Thanksgiving, we figured it’d probably be wise not to host… or make any plans for that matter. If she hasn’t made her arrival by turkey day, we’ll be cuddled up on the couch with Frugal Hound (ok, FH will actually be on the floor since she is, for unknown reasons, afraid of the furniture… ).

Given our minimal plans this year, we commensurately reduced our menu to suit just the two of us. Basically we’re being little kids and only making our very favorite dishes: homemade cranberry sauce, sage sausage stuffing, biscuits and, of course, pecan pie (Mr. FW’s fave) and pumpkin cake (my fave). Since we could go into labor at any moment, we decided to jump the gun and have this mini-feast over the weekend and, oh wow was it tasty. Don’t worry, we’ll freeze most of those desserts for consumption at a later date, lest the hospital think I’m giving birth to a baked good.

It’s entirely acceptable, and expected, in our culture to harvest the leftovers of Thanksgiving and people take pride in their creative recycling of the meal. But what about the rest of the year? It’s as though the leftover adoration inherent to turkey day is as ephemeral as an autumnal leaf… loosing its appeal as soon as the season terminates.

I vote that this year, we all commit to loving leftovers every week. Treat each meal with the same reverence reserved for the Thanksgiving feast. Look with new eyes upon ye Monday meatloaf, ye spilt pea soups, and ye kale-y salads. Cast not aside these edibles that have given their lives for you–instead, eat them as they were intended to be eaten!

But Leftovers Are Boring… 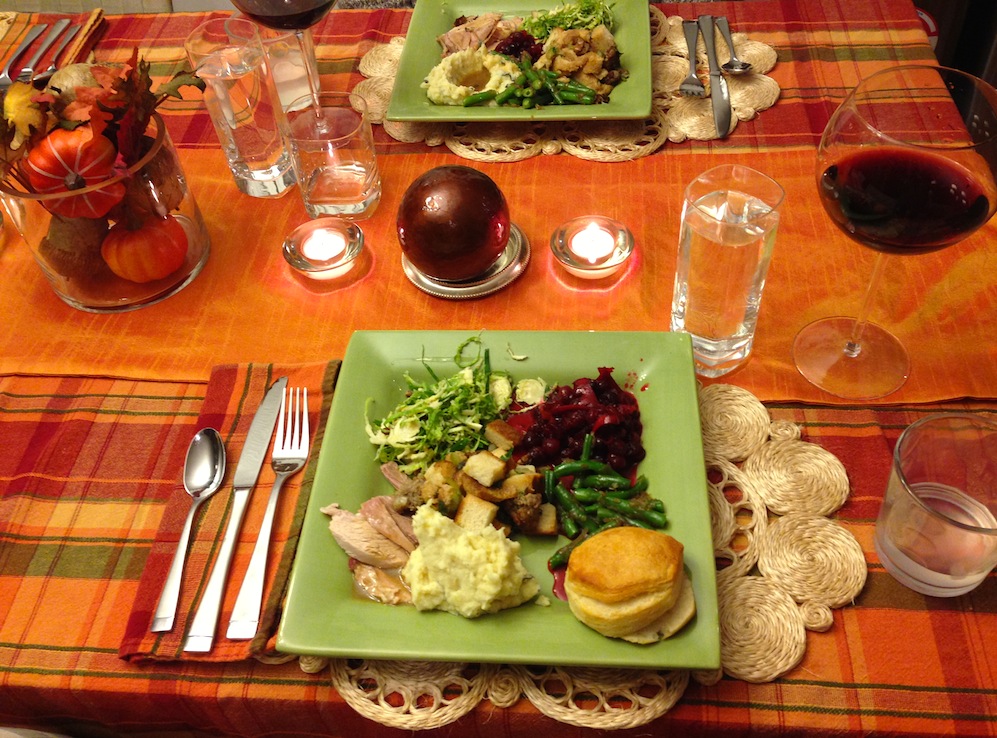 I’ve heard all the arguments against leftovers: they’re boring, I already ate that meal this week, I’m tried of that dish… and I say FIE to them all! People, get over yourselves and eat your old food! Leftovers are nothing more than frugal weirdo take-out: pre-made dishes that you simply take out of the refrigerator and eat. What could be better!

The notion that it’s somehow OK to allow food to languish and rot because we’re bored of it is tantamount to a frugal felony. I’m just saying.

If you can’t stomach eating the same vittles on repeat for a week, there are several perfectly serviceable options open. You can freeze it in pre-portioned meal-sized segments for future munching (just be sure to date your containers and keep a list of frozen contents to prevent your freezer from becoming a food graveyard). Alternately, establish a meal-swapping system with neighbors or friends whereby you trade leftovers so that everyone has something new and exciting to feast upon. I’ve never actually done the latter, but it sounds fabulous–I got the idea from readers who tell me they adore the system. Sounds good to me! 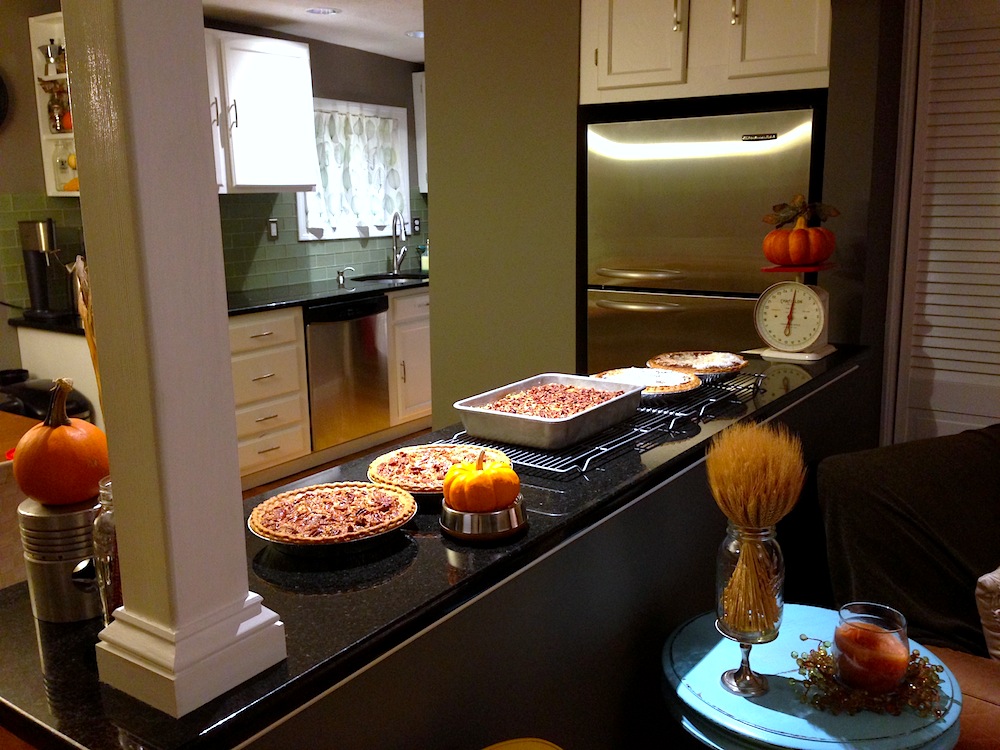 My baking spread from last year

And if neither of these approaches appeal, consider the origin of the leftovers: after all, they came from inside your kitchen. Hence, it’s entirely within your power to prevent them from recurring by making smaller quantities in the future. Yes, it’s vastly cheaper to cook in bulk and yes, I highly recommend cooking in large batches, but if you’re consistently tossing an ample portion of those massive quantities of chow, then you’re not realizing the savings anyway. Simply scale back recipes to single servings. Ain’t no shame in that.

Leftovers embody both the money spent to procure their ingredients and the precious time they took to cook and prepare. Not eating them means you’re missing out on the very richest fruits of your labor: the ability to take a night off from cooking and simply rest upon your culinary laurels. Don’t trash your laurels–indulge in them!

It’s About More Than Frugality

According to NPR, “Americans throw away about one-third of our available food” each year. That’s a staggering amount of squandered resources, which manifests as a detriment to both the environment and our wallets. Individual consumers aren’t responsible for all of this food destruction–restaurants, farms, and grocery stores play a role too–but we the people are certainly not innocently standing by munching day-old celery.

Mr. FW and I committed ourselves to not wasting food last year and, we’ve discovered that it’s an entirely feasible goal. Principally, we buy less food to begin with. We used to stock up on “necessities” because things we on sale or looked tasty in the moment. No more. We’re ardent list-followers and we only buy what we need. In the rare instances where life intervenes and we find ourselves with extra food, we either freeze it or give it away to friends. In my Buy Nothing group, it’s very common for people to give away food that they know they won’t be able to eat. I myself gave away a few cartons of milk not too long ago.

For the most part, Mr. FW and I totally ignore food expiration dates. These are usually set artificially early and there’s typically nothing wrong with the food itself. We give it the ol’ sniff test and, provided it passes (which it always does), we eat it.

As I continually discover through embracing extreme frugality and making it my worldview, living frugally has benefits that extend far beyond the money we save.

By reducing the amount of food we waste, we’re: 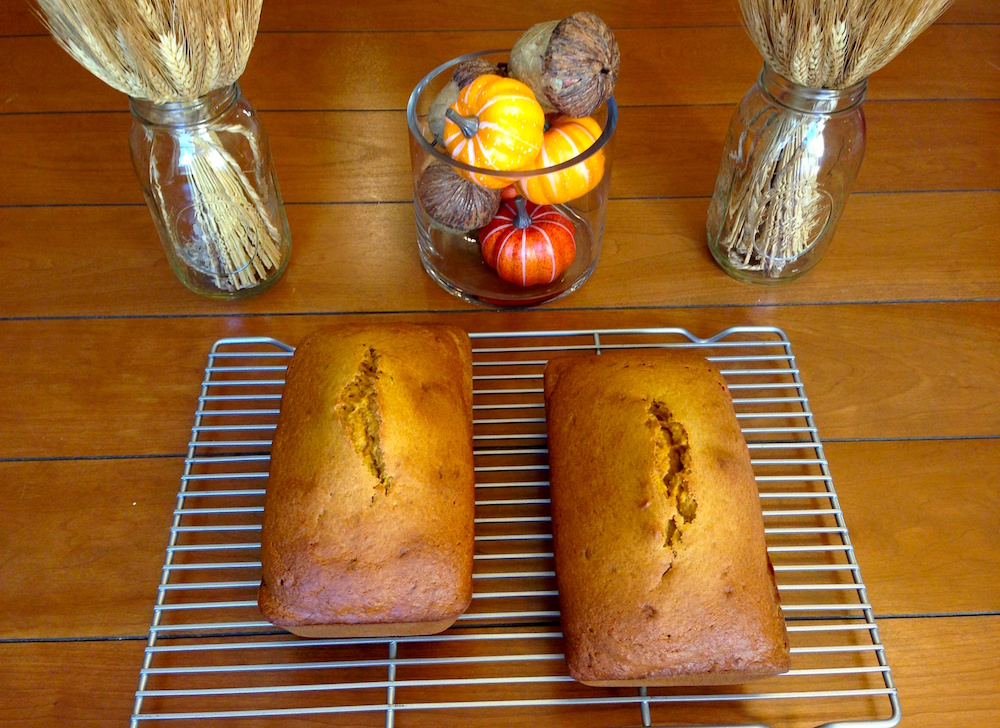 Mr. FW and I are blessed beyond belief to have access to mountains of healthy food easily purchased at a clean, safe grocery store a mere few miles from our home. But not everyone is so fortunate. The ability to obtain food in one’s neighborhood–let alone afford it–is a profoundly privileged position. Many people live in proverbial food deserts where nourishing food is nearly non-existent, or the cost of it is prohibitively expensive.

This Thanksgiving, while expressing gratitude for the myriad freedoms we enjoy in our country, let’s remember that the very food on our tables is worthy of our deep appreciation. The embarrassment of riches that Mr. FW and I have in our lives: clean water, shelter, love, warmth, and food are not universally held rights. Reminding myself of just how fortunate we are is an important lesson for me to internalize now and always. So don’t waste your food, honor it and give thanks for it.