This Month On The Homestead: Mud, Trellises, and The Land Trust 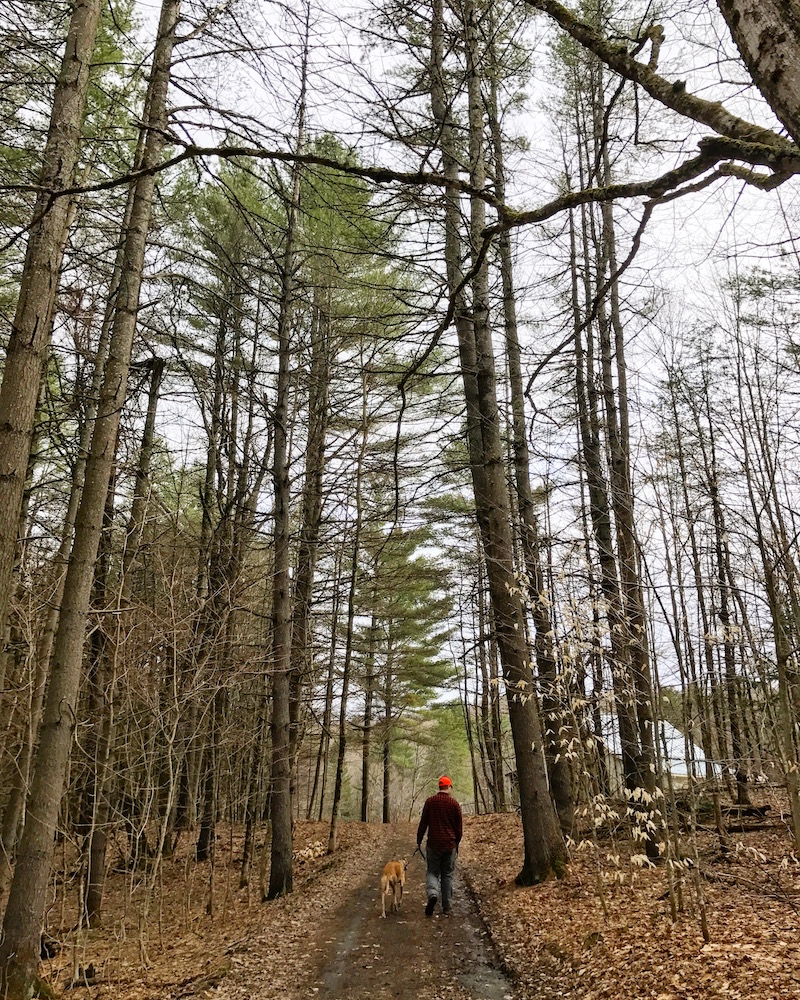 I’d forgotten what spring means. I’d forgotten how the grass greens itself and the plants reanimate from a dormancy that seemed so permanent, so fatal. I’ve forgotten the names of flowers and the way in which bulbs progress. I forgot how the buds on each individual branch of each individual tree sprout with a certainty that they’ll bloom. I’d forgotten, but fortunately they did not.

For months, all we’ve seen in every direction is white. Sedimentary layers of ice, snow, snow, and ice. Our fields were wide swaths of bridal satin, broken only by the darting imprints of little creatures and our own clumsy snowshoe tracks. Our trees were caked with icing that puddled on the ground as gravity reclaimed it from heavy, bent branches after each storm. 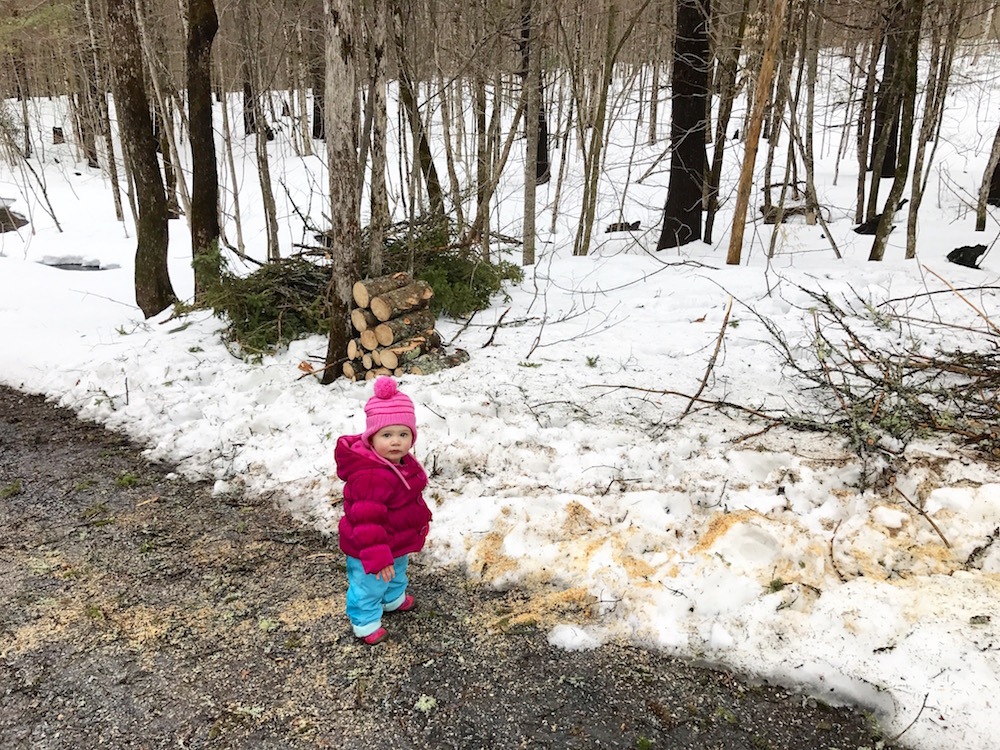 As fellow Vermonters know, spring is not the season that follows winter in these parts. Mud season is the necessary intervening experience. Since many of our roads out here–not to mention everyone’s driveway–is dirt, when the snow melts and saturates this loamy earth, the predictable result is m.u.d. We’re not talking a few piddly puddles that a mini pig in boots would look cute in, we’re talking kettle drums of soft earth that a person can lose a car in, let alone that mini pig.

Heavy trucks aren’t allowed on side roads during this season, children are warned not to lose their boots in the muck, and neighbors say they’ll come see you once mud season has passed. Fortunately, this year was a relatively mild mud season for us and there are only a few ruts meriting their own zip codes on our driveway, which Mr. FW will need to grade with the tractor.

Our cars–the dainty Prius included–managed the season quite ably indeed since our snow tires perform the remarkable double duty of mud tires. All in all, a rather brief and uneventful mud season. No one lost so much as a boot.

Although April 1st kicked off the month with a legitimate snowstorm/blizzard, by the 30th we were awash in greening grass and budding trees. Even a few early flowers–crocuses, daffodils, and some pink stuff I don’t know the name of–graced us with sparkling color. Such a profound change from the monochrome of winter. 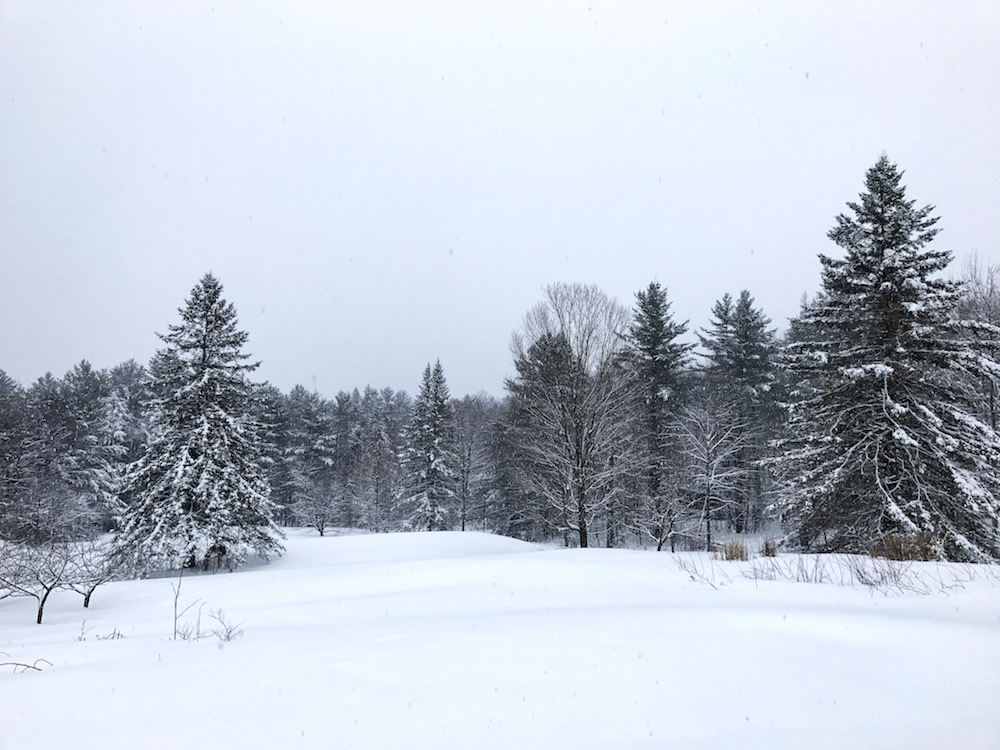 I took this pic on April 1st…

All winter long, there weren’t many outdoor tasks requiring our attention other than moving snow. But as soon as that snow melted, we were faced with the eternal truth of springtime: we were already behind on chores. Mr. Frugalwoods is outside almost every evening tackling chores ranging from clearing fallen trees to pruning our plum trees.

We have a bevy of black raspberry bushes in the garden bed closest to our house and harvesting them last summer entailed a full body immersion with thorns and prickles everywhere. I felt like a bear throwing myself into those thorny brambles. To combat this situation, Mr. FW built two trellises (trelli?) for our berries to vine on. This, apparently, being what you’re supposed to do.

He cut a few young hop hornbeam saplings–as part of his ongoing forestry maintenance–to serve as the posts for the trellises since hop hornbeam is a relatively sturdy, rot-resistant wood that’s plentiful on our property. Then, he tied sisal twine (it’s like thin rope) to create the trellis rows and tie up the berry vines. Technically, you’re supposed to use wire, but we didn’t have any wire and we did have twine, so we’ll see how they do. Thus far, a moose hasn’t crashed through the trellising system, which would likely be its chief predator. Fingers crossed. 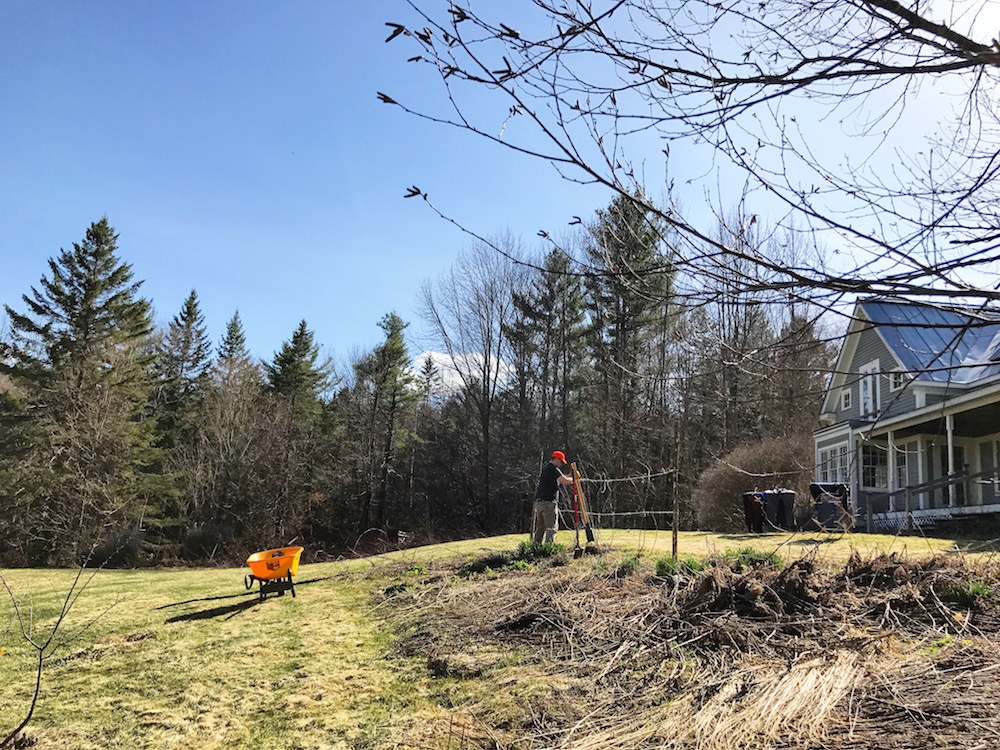 Last year we made peace with the fact that there’s no way we can achieve the permaculture dream of growing all our own food in the first few years out here. Homesteading is our longterm life plan and we intend to live in these woods for, perhaps, ever. Anytime one of us starts to tick off the list of things we haven’t accomplished yet, the other one chimes in with a reminder that we have decades to bring this dream of ours to full fruition.

Stressing out in the short term is counter to the real goal of this lifestyle: a peaceful coexistence with nature absent the frenzied urban life we left behind. 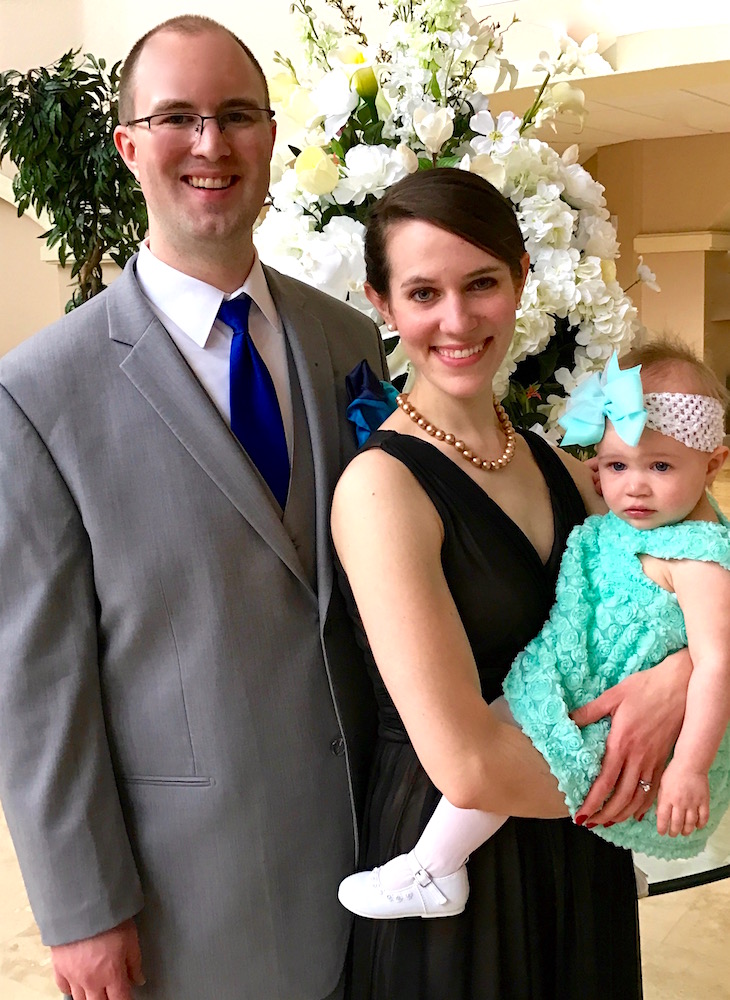 At the wedding (not our typical look)! And yes, I bought my dress at a garage sale for $5 approximately 5 years ago…

We were gone for several days to Orlando, Florida for a family wedding this month, which provided a fun change of pace. Babywoods got to splash in a pool, run around with her grandparents, aunts and uncles and throw food down my nice dress in a restaurant. All in all, a lovely trip!

Since Mr. FW was the best man in the wedding, I had to solo parent Babywoods during the ceremony, which actually worked pretty well for exactly one reason: I brought a backpack crammed with food. I kept Babywoods in the hallway of the church and let her run around until the literal second before the wedding started (I had the wedding coordinator tip me off).

Then, I slipped into the very back pew in the sanctuary, clapped a huge bib over her fancy dress, and commenced the feast. I let her double fist veggie pouches and, when she started to make noise during the vows, I deftly shoved an already-peeled banana into her mouth.

No one heard a peep, so I think it was a resounding success. Not an experience I want to repeat daily, but it totally worked for a wedding that I very much wanted to attend and did not want a yelling 16-month-old to rudely interrupt.

We had a wonderful time visiting family but both agreed we were happy to get back home to our quiet, peaceful, nature-filled routine. Mr. FW and I are homebodies and woods-bodies to the core.

Alert: We Have A Volunteer Land Steward In Our Midst 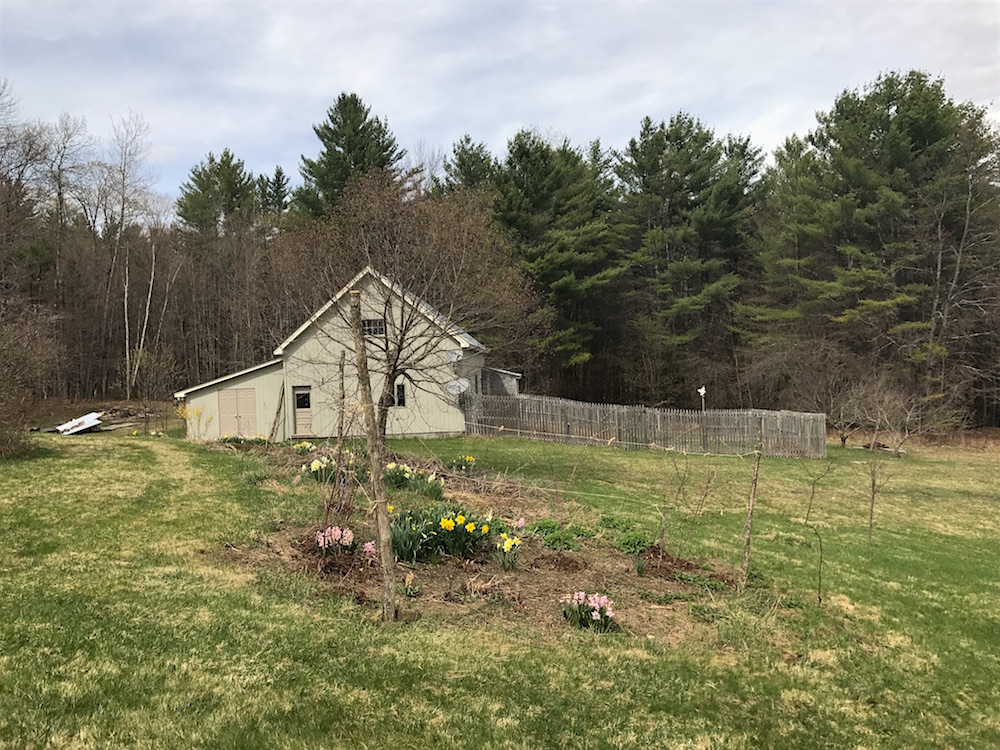 The finished raspberry trellises along with their floral friends

Have you ever wanted to navigate by compass through acres and acres of dense forest looking for property boundaries with a map that was hand-drawn (poorly) in the 1880s? Well, Mr. FW sure does. The man lives to navigate seemingly unnavigable pieces of forest–the fewer actual trails the better. He’s been traversing our property for months now and decided to take it to the next level.

Fortunately for him, there’s an organization that actually needs his weird brand of technological-woodsological skill set: the Upper Valley Land Trust! This Land Trust, and land trusts generally, exists to provide land owners with an opportunity to conserve their property in perpetuity, which ensures their land will never be turned into condos or parking lots. Yay!

As part of the conservation program, the land trust is required to visit each property in conservation every year. In order to accomplish this herculean task, they rely upon volunteers. Enter weirdos like Mr. FW. 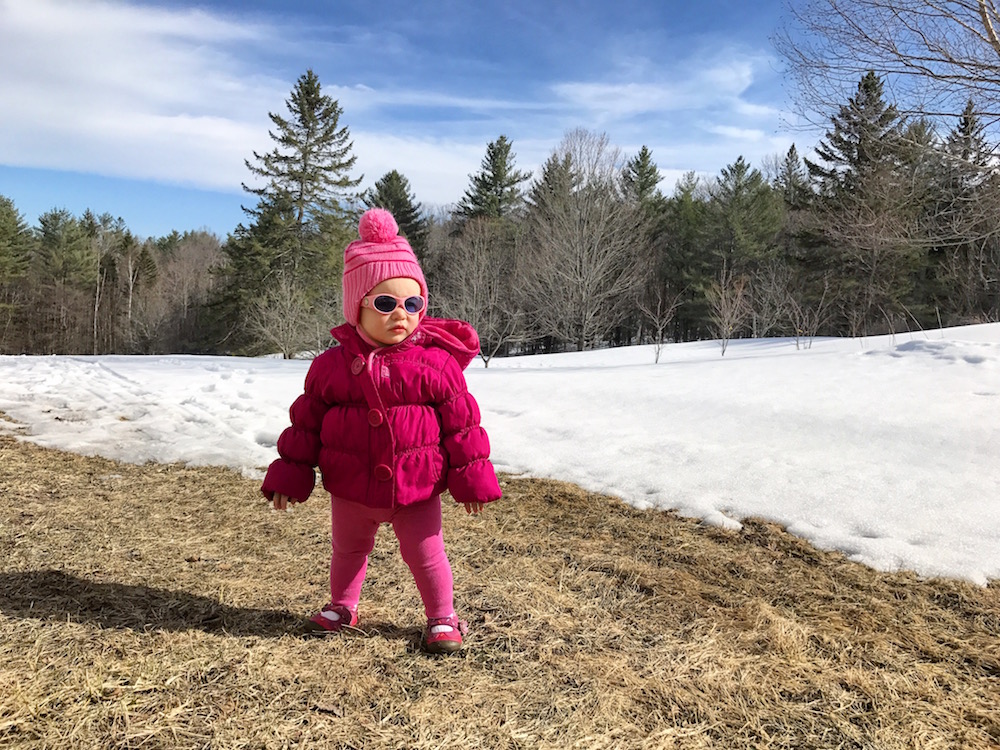 He attended a daylong training on serving as a volunteer land steward, passed with flying colors, is now a certified volunteer land steward, and was assigned several enormous parcels (400 and 600 acres respectively) near our home. I love that he’s able to utilize his unique skills of navigating and hiking through dense woods in service of an organization with such a wonderful mission. His aptitudes were really wasted in the city. Yet another reason why we love living in Vermont.

Onward to May frugal comrades!