This Month On The Homestead: Seed Starting and Tree Clearing 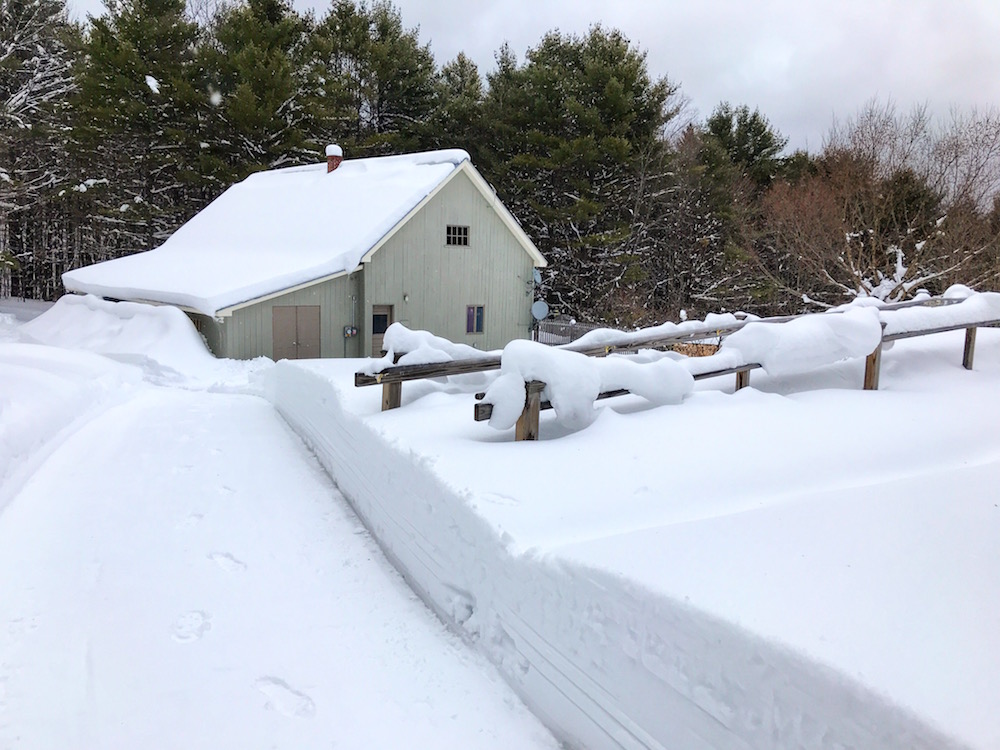 Early March, with its balmier temperatures and reluctantly melting snow, set our minds towards spring. We foolishly began to discuss impending blooms and said reckless things like, “maybe we’ve had our last snow of the season.” Overhearing our misguided words, March retaliated in an effort to prove how wrong we were and dumped a righteous amount of snow.

It snowed daily, weekly, heavily. With gusto and vigor, the landscape was newly coated and freshly imbued with the mummification of snow. Deep as that snow was and lusty as each storm seemed, eventually bare ground will win out. Rounding the final days of March, mud began to take over our driveway and roads. Snow still coats most of the landscape, but mud is decidedly the upstart usurper. 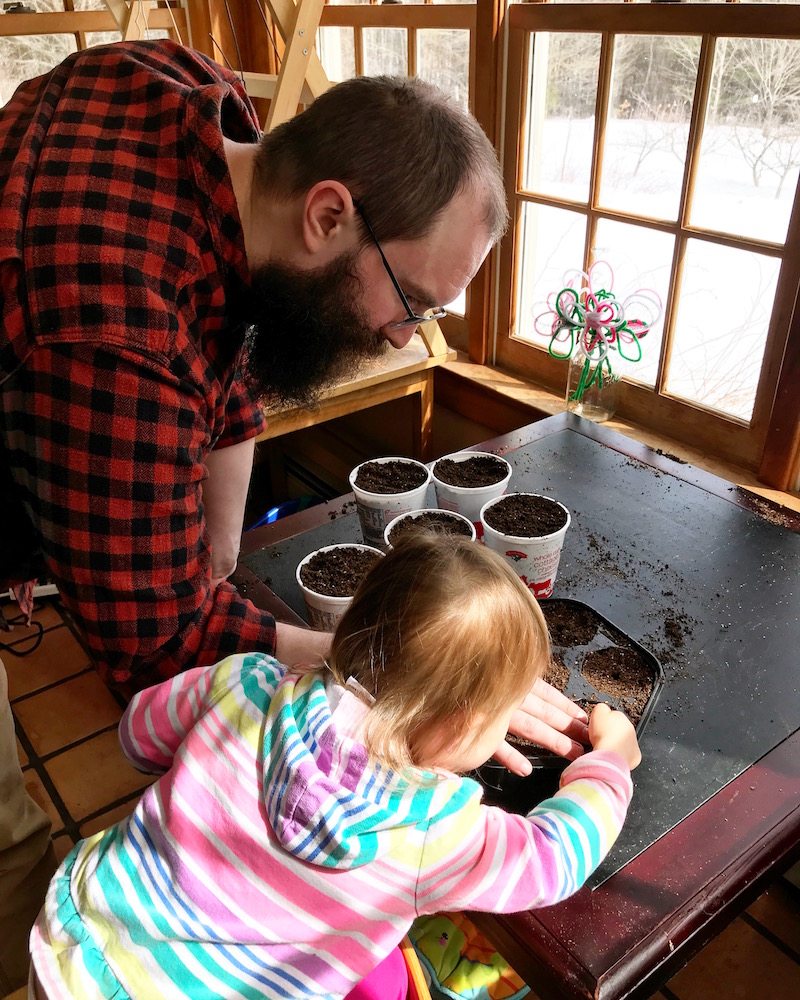 We almost let March slip past without this crucial chore in hand, preoccupied as we were with our new baby and new life as a family of four. But Mr. Frugalwoods rallied in the waning days of the month and got our vegetable seeds started! If you have no idea what seed starting is, you are in good company because before moving here, I too had no idea what seed starting was. Since we live in a cold climate (zone 4 for you garden aficionados) with a brief summer growing season, plants need to be started indoors and then transplanted into the garden once temperatures are amenable to not freezing them out.

Plants have a certain number of days they must grow in order to reach maturation and they typically can’t reach that required number of growing days here in Vermont if they’re planted outside once temperatures are warm enough. By planting seeds in tiny pots indoors, we’re able to grant them enough runway to germinate and mature in time for us to harvest tasty, tasty vegetables before–you guessed it–it gets cold again! The window between spring and fall is short.

The other reason to start seeds indoors is soil temperature. Hot weather plants, such as tomatoes and peppers, will only germinate when the soil is warm, which makes it almost impossible to plant them directly into the garden. By starting the seeds inside, we can control the temperature of the soil, which encourages germination early on. 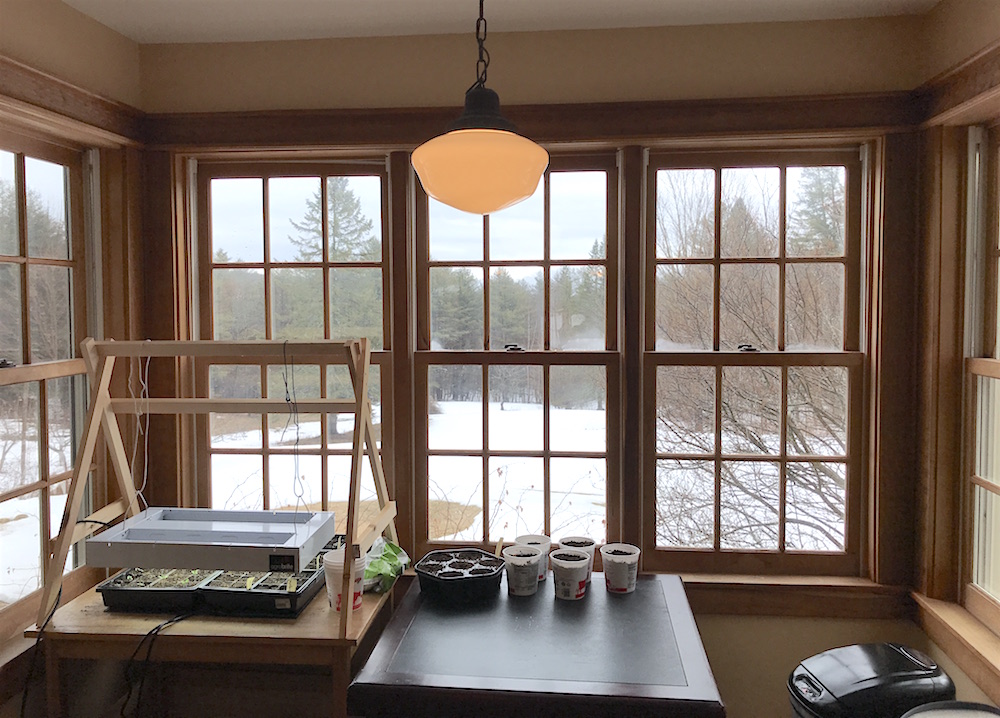 Our seed starting set-up in the kitchen

This is our second year starting seeds indoors, so we feel like we have a slightly better handle on what we’re doing (although we will certainly still manage to misguidedly kill a large number of vegetables… ). Last year, you might recall we set up our seed starting apparatus in the upstairs bathroom.

This year, we decided to take over the bay window area of the kitchen as it gets better sunlight and is a more convenient spot for our mini gardener, Babywoods, to observe plant progress. Being excessively interested in doing whatever we’re doing these days, Babywoods was overjoyed to “help” Mr. FW plant some seeds. Imagine for a moment how tremendously useful it was to have a 2-year-old jamming teeny tiny seeds into small buckets full of dirt. Inside the house. Super useful. But she loved doing it and we want her to develop an appreciation for growing veggies, so I figure this is a good way to foster that. Never fear, the dirt consequently strewn all over the kitchen was ably swept up by none other than me… and there might be 1,000 tomatoes planted in one teeny pot, but we’ll sort that out later… 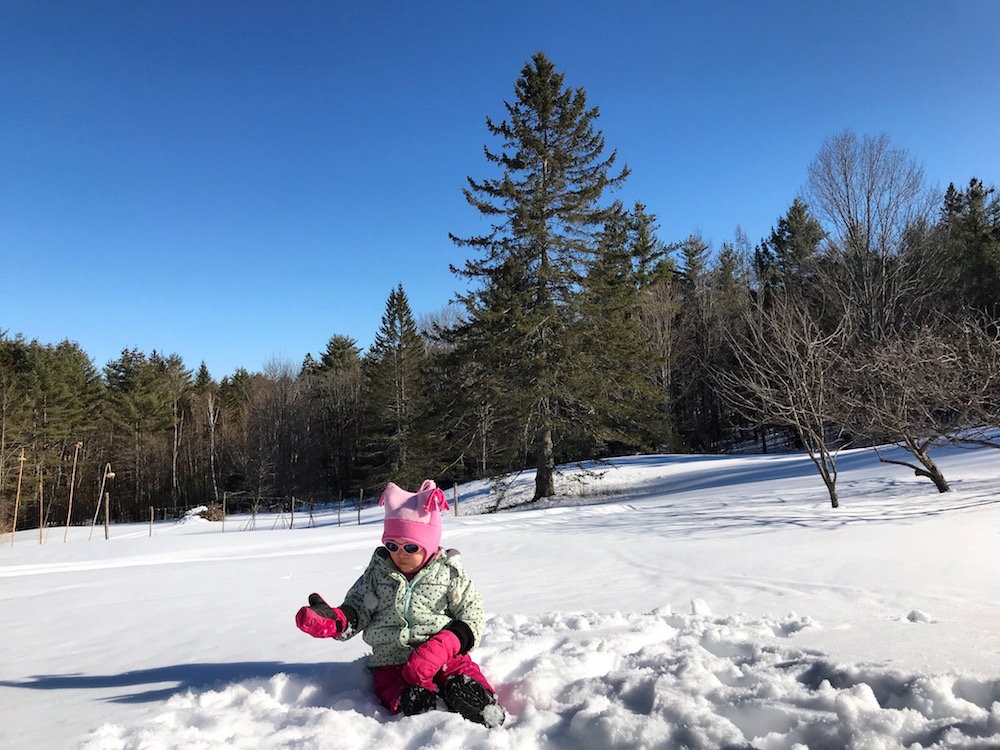 Babywoods informed me she was “planting a garden and eating the carrots.” I think she’s ready for spring.

To encourage germination, we hung our grow lamp from the little wooden A-frame Mr. FW built for it last year (pictured above). We also have these heating pads underneath the pots to keep them toasty, which worked well last year. So far, we’ve started three varieties of cherry tomatoes, ground cherries, jalapeños, cayenne peppers, and Thai basil. In a few weeks, we’ll start cucumbers, peas, beans, pumpkins, sunflowers, and possibly some other stuff too.

Getting these little seeds started inside is imperative if we want them to come to full veggie fruition before fall. Fingers crossed this stuff germinates and grows! If it doesn’t, we’ll buy plant starts from a local farm. So all will not be lost, but, it would be lovely to grow our own plants from seed. In terms of cost, it’s only cheaper over time to start your own seeds, owing to the start-up costs of a grow lamp and heating pads. But, as with many things out here on the homestead, amortized over many years it is a cost savings. It’s also true that by starting your own plants, you can control what types of fertilizer and pest mitigation are applied. The downside to starting your own seeds is that sometimes things just don’t germinate (such as our jalapeños last year). Another upside? You have many more options since a nursery might only have a few different varieties of a vegetable, but starting from seed affords you a much larger selection. Before we started trying to grow our own vegetables in earnest, I thought you just sort of tossed some seeds into the ground and hoped for the best. How wrong I was! 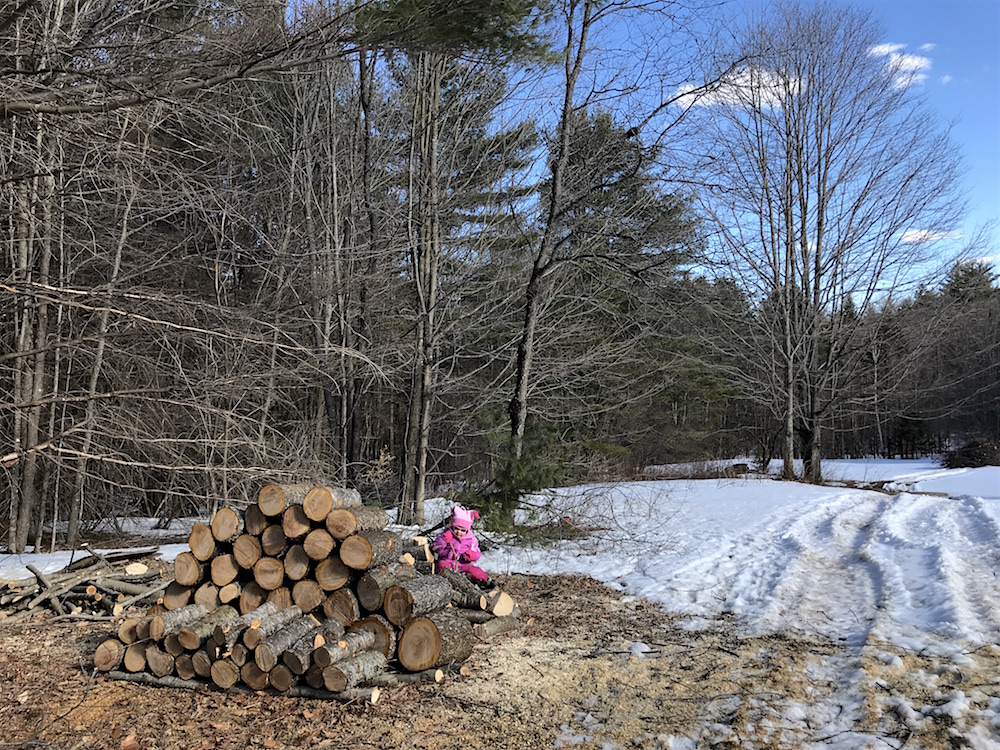 I really should re-title this series “all the work Mr. FW did this month that I just write about” because those are the facts on the ground right now. One day I’ll be out there alongside him doing more of the physical labor of the homestead, but for now, I am focused on rearing the two tiny creatures we have.

My work is less interesting to write about–laundry, cleaning, nose-wiping, book reading, nursing, and toddler chasing–though no less important. While Mr. FW and I share childcare responsibilities, he is the director of outdoor management and I am the director of indoor management. Our paths cross often, especially since he does all of the cooking, but you can’t exactly wield a chainsaw with a baby on your back and a toddler underfoot… at least, it’s not recommended. And when Mr. FW watches the kids, I usually hike alone in the woods, which while enjoyable, is not really all that productive…

At any rate, Mr. FW devoted quite a bit of time this month to clearing away trees at the perimeter of one section of our yard as they were: 1) shading our apple trees; 2) shading a portion of our vegetable garden plot; 3) largely diseased and falling down. All in all, a patch of trees that needed to be felled. Of particular concern was a mess of black cherry trees that have black knot disease, which can affect plum trees (we have three that we’re trying desperately to keep alive). This wood will all make excellent firewood and it’s a good time of year to cut firewood as the leaves aren’t on the trees yet but the snow isn’t too deep, which makes it fairly easy to maneuver around in the woods. Mr. FW’s goal of having three years worth of firewood split and stacked is starting to seem achievable! 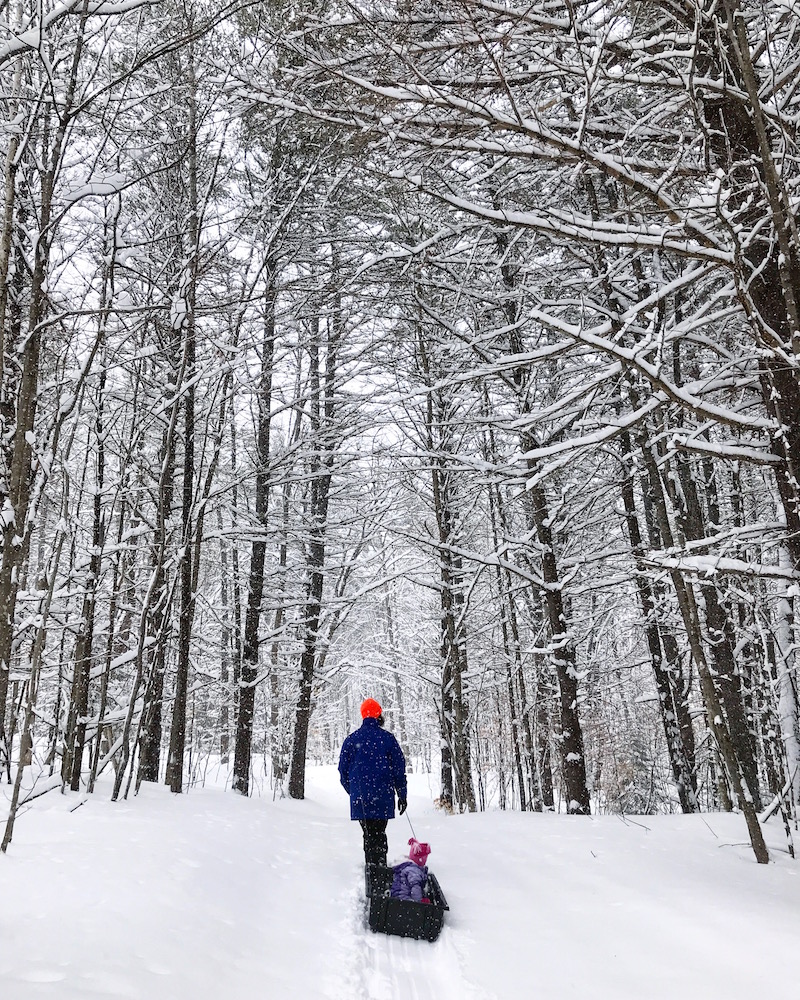 Mr. FW and Babywoods on the trail this month

Mr. FW also continued his efforts to build more hiking trails through our woods. Since it’s easier to see the contours of our land without leaves on the trees or scrubby undergrowth peppering the woods, Mr. FW’s been mapping out where old roads and paths intersect. This summer he’ll go back and clear out the fallen logs and underbrush to create more loops in our trail system. More on his trail building process is here.

Much as I adore our woodstove and the fact that we heat our home with wood from our land, fewer fires are a sure sign of a season change. At the beginning of March we were averaging three fires per day and we closed out the month at just one fire a day. This is a season of mixed emotions for me since I love the snug, cozy routines of winter but am also ready for warmth and an ability to go outside without a coat.

As I sit here at my kitchen table with Littlewoods snoozing in her infant carrier on my chest, looking out at a landscape dithering between snow and mud, I’m reminded of how ephemeral all of our experiences are. In a few months, this baby won’t be tucked in against me so tightly–she’ll be holding her head up, looking around, emerging from her cocoon of infanthood. And there’ll be no snow to conceal the imperfections of our undone projects, our incomplete tasks, and our revolving outdoor to do list. In a few months, there’ll be blaring sunshine and growing vegetables and bigger children. So for now, I will relish this moment of indeterminate season.