How We Saved $2,120 by Buying a Mattress Online

Check out my five and seven year updates here:

And now, enjoy the original 2014 post, a rare write-up from Mr. Frugalwoods:

“People buy shoes online even though you can’t try them on… a mattress is no different, right?”

Faced with buying a new mattress two years ago, I uttered these words to Mrs. Frugalwoods and then embarked on a frugal slumber experiment. My goal was to see if my wife and I could buy a mattress online, save tons of money, and still get a great night’s sleep.

Let’s start at the beginning. Mrs. Frugalwoods is what we would lovingly call an “active sleeper.” She is a tiny woman with powerful kicking legs. Must be all that yoga. We had a double bed for the first several years of our marriage and I have the scars to prove it! So when we moved back to the Northeast a few years ago, getting a bed large enough to provide Mrs. Frugalwoods with room to roam and myself to sleep without being pummeled was on the top of my list. 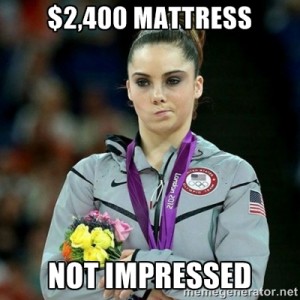 How we felt shopping for traditional mattresses

And holy mother-of-pillowtop are king sized mattresses expensive! This low-end tempurpedic is $2,400! Our car isn’t worth $2,400! The Mrs. and I saw those prices and were not impressed. It also quickly became apparent that mattresses are extremely profitable and sold in a manner similar to used cars. I do not need a salesperson to assist me, thank you very much.

But we really needed a mattress. So we made a list of our snoozing requirements and asked the internet.

What did we want in a mattress?

We buy a lot of household items on amazon.com anyway (gloves for hound teeth brushing, for example) so it was a natural place to start looking. Turns out, they have an entire mattress section. Go figure. After reading through a bunch of the firm mattress reviews, we settled on the LUCID 8″ Memory Foam Mattress. It checked all the boxes and 2 years ago was only $279 for the king size. Budget score!

Plus, and this is the really crazy part, Prime Shipping! That’s right, Amazon shipped a king sized mattress to our door in a mere 2 days from ordering it, FOR FREE.

When it arrived, we warily eyeballed the heavy, awkward, long tube that the mattresses was vacuum packed into. The box was plastered with warnings to put the box in the room where you want the mattress before opening it and releasing the tightly coiled foam.

We carefully put the box in the bedroom and then slit the straining plastic holding back the surging foam mattress. As dramatic as it sounds (and as we had imagined it), in reality the foam just slowly unrolled itself and started gaining the shape of a mattress. Totally anticlimactic.

Did it smell a little “new car-ish” (for lack of a better term)? Yes, but it wasn’t overwhelming. The box suggested leaving the windows open for a few hours while the foam attained its shape. We opened the box when we got home from work and by the time we were ready to go to bed, the smell was no longer noticeable. 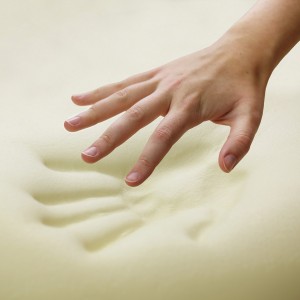 This is not my hand, but it could be. It’s nice!

So how does a $279 mattress from the internet feel? Ridiculously nice. I actually remember chuckling as I lay down for the first time. We picked the 8″ version specifically because it was the firmest (they also make 10″ and 12″ which are softer) and wow does it deliver. Firm but comfy and extremely supportive of our backs.

Two years later, internet mattress is still firm and supportive! Since this mattress has foam layered in a specific order, you can’t flip it but you can rotate it. We do that every 6 months to try and keep the wear level the same. So far I haven’t noticed any significant settling of the foam.

One of the things I was most concerned about was how it would feel during the summer. I’d heard from some people that memory foam can hold the heat next to your body. In practice we haven’t noticed any additional heat.

In short, it’s been a great mattress and we expect to get many more years of good sleep on it!

Over the past two years, I’ve evangelized buying a mattress from Amazon to coworkers and friends, several of whom have bought the same or similar mattresses. So far no complaints! 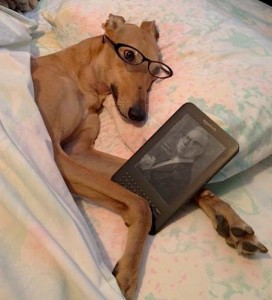 Take a look at the Amazon mattress section, in particular the Lucid foam mattress, and keep it in mind the next time you’re in the market for a bed.

Have you purchased a mattress online?  Ever thought about it? Think it’s the weirdest thing ever? Let me have it! 🙂

Note: I bought the mattress with my own money. No one paid me to do this review, I just think it’s a pretty awesome way to save money. The links to the mattress are affiliate links, which means if you also score a deal on a great mattress, Amazon will pay the Frugalwoods Family a small percentage of the sale. Frugal Hound thanks you in advance!