The Curious Parallels Between Frugality and 7 Years of Marriage

Mr. Frugalwoods and I got married seven years ago. Yesterday was our anniversary and we’ve had a pretty awesome and frugal ride thus far. Meeting our freshman year of college, when we were 18 and 19, meant that we essentially grew up together and honed our approach to life as a team.

Now that we’re at least passably mature adults, I’ve realized our trajectory is equal parts amazing and terrifying. It’s amazing because we were able to navigate the early challenges of adulthood side by side, but terrifying because we were so young and immature when we met that I’m somewhat shocked we held it together and made it this long! I think the key to our longevity as a couple is our adaptability, our willingness to change together, and our lack of fear for the unknown (coupled with some foolhardy gusto)–all of which, incidentally, are attributes of the frugal weirdo. 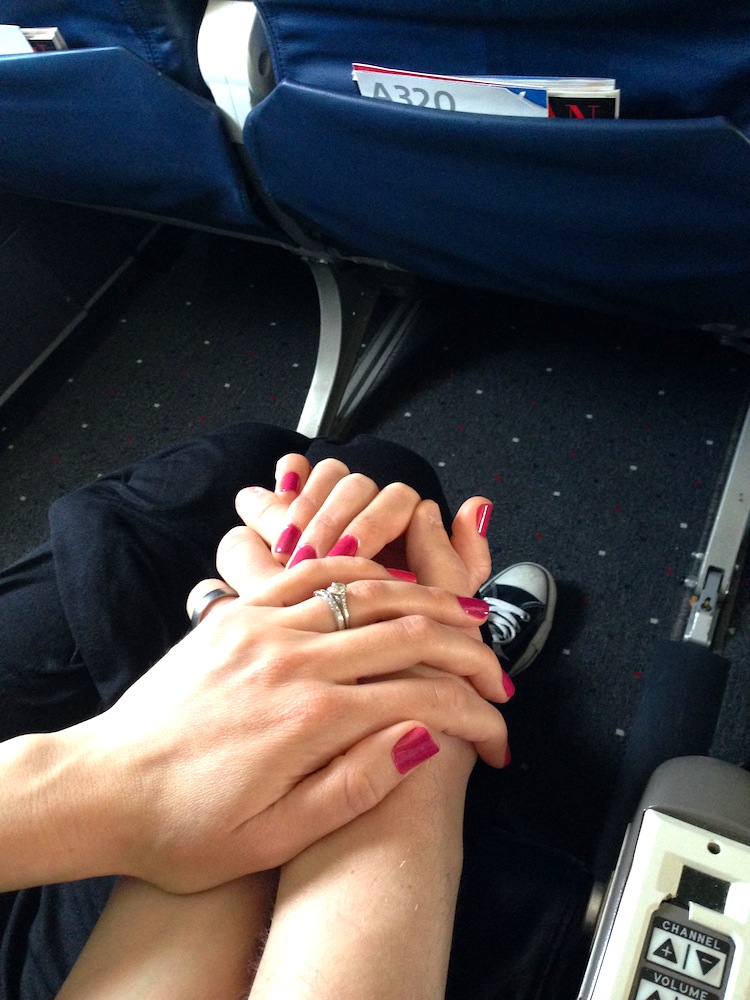 Holding hands on our flight to North Carolina the other day.

Mr. FW and I today are almost completely different people than when we first met in the lecture hall seats of our journalism 101 class, yet we’re more in love than ever.

We’ve found ways to stay on the same page financially, about our relationship, and about what we want out of life, while evolving into the people we are now. I think it’s unrealistic to expect someone to forever be the same person and I’m thankful we’ve learned to respect each other’s growing pains and desires for innovation over the years.

This inherent flexibility and creativity is central to how we live. We’re not rigid in most aspects of our lives, which has enabled us to imagine a future (retiring to a homestead at 33) that’s bizarrely divergent from the relatively conventional path we started on. Our adaptability has allowed us to move often for our jobs, explore new avocations, and perhaps most importantly, live frugally.

If I insisted on buying new clothes every season or wanted everything I bought to be in perfect condition (goodbye, used market) or didn’t see the beauty and simplicity in not buying the things that everyone else does, we’d be frugally screwed. But by keeping an open mind and being fine with, say, some baby boy clothes that we’ve received as hand-me-downs for Babywoods (who is a girl, by the way), we live a thrifty and happy life. Frugality necessitates approaching life with a sense of adventure and a level of individuality that’s uncommon in our image-focused consumer culture.

In this same vein, I keep an open mind about Mr. Frugalwoods and our relationship. We both have a passion for a diversity of experiences and learning new things. By allowing one another to pursue our interests, I think we live a richer life. I’ve heard of couples in which one partner doesn’t “allow” the other to indulge their hobby of home beer brewing, for example, which seems odd to me.

I don’t dictate what Mr. FW can and can’t do (aside from, you know, basic principles of not breaking laws or our marriage vows) and he likewise doesn’t direct what I do. We don’t tell each other not to spend money, rather, we decide jointly that we choose not to spend. By not restricting each other’s growth, we’ve been able to bring more creativity into our lives.

Mr. FW and I also find it refreshing to dabble in what the other is involved with. Through this approach, we’ve built a close relationship with many avenues for connection with each other.

We’re actually quite different from one another in many ways and so its been important for us to find common ground. Mr. FW is an engineer while I’m a writer. Mr. FW can take apart a machine, fix it, and put it back together with aplomb. I, on the other hand, can barely even use machines properly (I swear our household appliances hate me). But I bet I could write an impressive machine instruction manual.

We have no desire to share every last predilection, but we do try to learn about what the other is a fan of. Mr. FW went to yoga with me for quite some time because he knows it means a lot to me and I wanted to share it with him. It’s not really his thing for a daily or weekly workout, but he’ll downward dog from time to time. 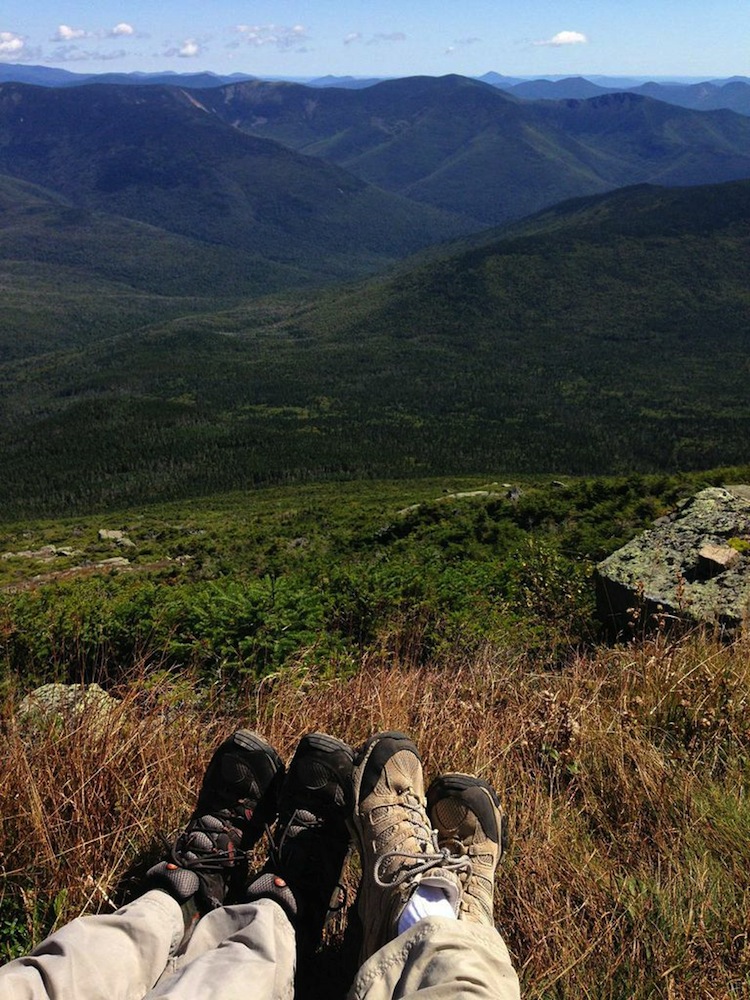 On the Franconia Ridge summit

I took an interest in Mr. FW’s devotion to the outdoors and hiking and ended up turning into just as much a fanatic as him. When he first suggested we go hiking, I was less than enthused. But I went and I fell in love with it. Now, we’re basing our future around this love of the woods, which is not a trajectory I would’ve have predicted for myself 10 years ago.

Sometimes I find myself frustrated by Mr. FW’s endless list of hobbies (everything from bread baking to welding) because it overwhelms and even intimidates me.

And I worry I won’t be able to keep up with everything he does. But, I’ve come to realize it’s just his nature to be endlessly curious and constantly learning. I, in turn, have become more flexible in my approach to the unknown.

Mr. FW has wanted to live on a homestead in the woods ever since his boy scout days of tromping through the woods every weekend. I, on the other hand, remained skeptical until late 2013. But my willingness to explore this pursuit of his led to a fervor all my own. I’m grateful that we’re both open to new endeavors and to trying out the other’s hobbies. It has expanded my life in ways that astound me. Even writing Frugalwoods began entirely at the urging of Mr. FW.

When I Decided To Marry Mr. Frugalwoods

It’s actually this willingness to branch out that really sealed the deal for my decision to marry Mr. FW. I’m not sure if he knows this or not (well, he does now), but, I decided our senior year of college that I’d be marrying him. He didn’t propose for another two years, but, I knew then. 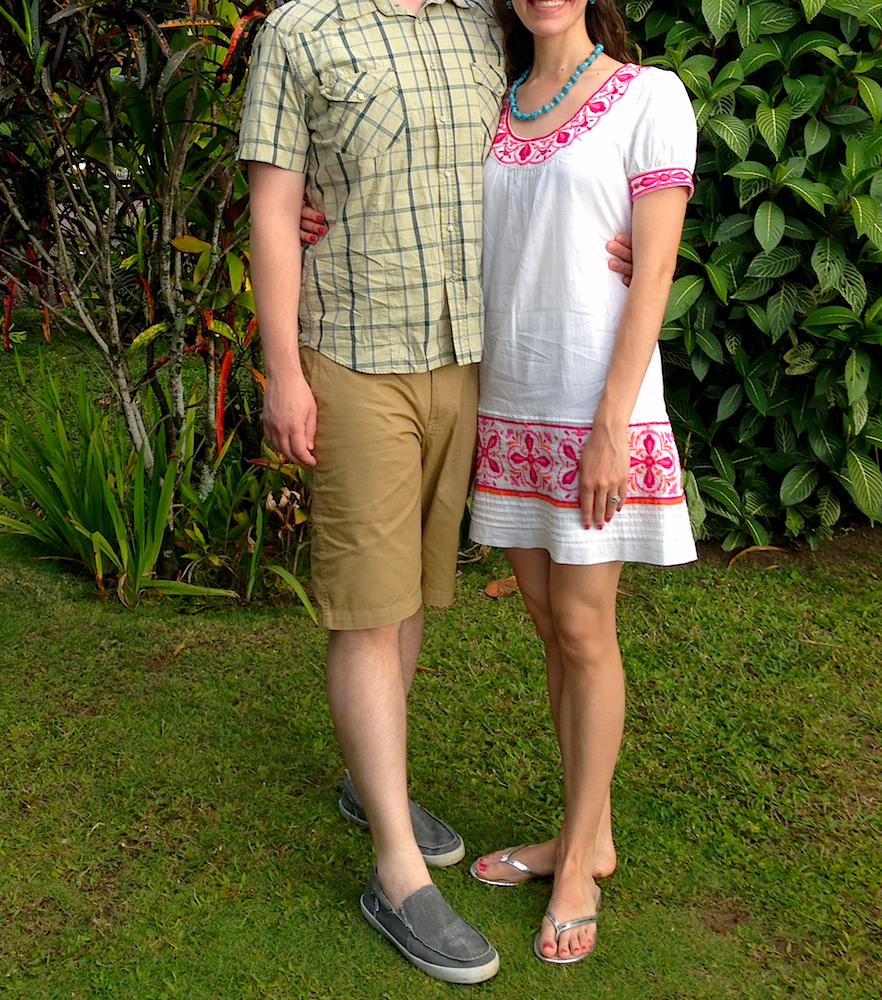 I was interested in feminist political theory (still am) and was jazzed to be taking an advanced seminar on the topic the first semester of our senior year. We were dating at the time and I’d been chattering about it–I guess a lot–because when I walked into class on the first day, Mr. FW was sitting there beaming.

He’d signed up for the class, unbeknownst to me, just so that he could experience and understand what I was so excited about. He was the only guy in the class, but he wasn’t reticent. He expressed his views, did the readings, and was a full and active participant in the course.

I was profoundly touched that he cared enough about me to go outside of his comfort zone and rearrange his senior year schedule in order to connect with me in a deeper way. This simple act showed me that he cares deeply about me and listens to me, is willing to try new things, doesn’t care what anyone thinks about him, and wants to chart his own path through life. That’s really all I needed to know.

How To Not Fear The Unknown

Another tenet of our relationship is that we make it a practice not to fear change or the unknown. Sure, we’re cautious, circumspect people and we don’t make any decisions without extensive research and planning (for one tiny example, see our extremely in-depth consideration of the purchase of a storm door…). But, we don’t fear. People have asked what we’ll do if we don’t enjoy homesteading to which I reply, well, we’ll figure out our next adventure. The prospect of working towards another dream in the future is honestly not that big of a deal to us. 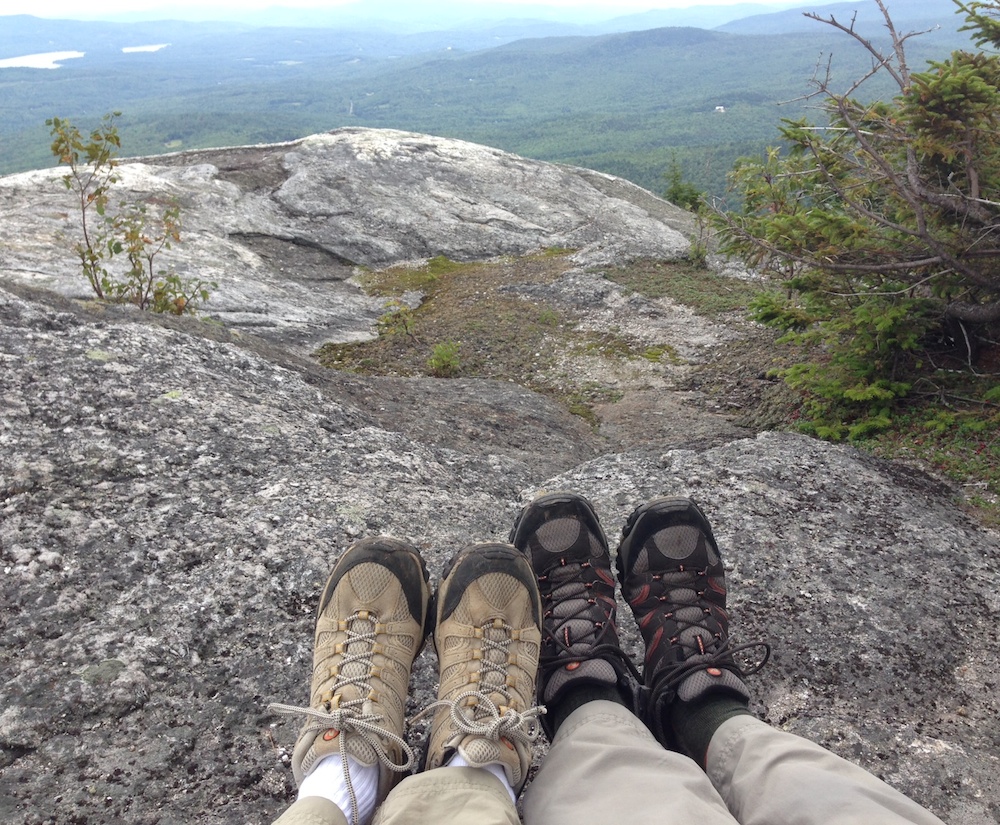 Seeing the world through the same lens

Part of this absence of fear stems from the fact that we’ve never been in debt or in a position of living paycheck to paycheck. Frugality gives us ample options. If we both lost our jobs tomorrow, we’d shrug and figure out our next move. It would be annoying, but it wouldn’t be a disaster or a cause for serious alarm. Why? Because we spend so far below our means that we could live off our savings for many years without making another dime or earning another cent of interest (and that’s accounting for inflation).

Having this type of monetary security as people who don’t earn investment banker salaries and who are only 31 is pretty unusual. But, it’s not impossible by any means and, it’s honestly not that complicated. All we’ve done is adhere to the ethos of extreme frugality and altered our mindset with regard to consumer culture.

Just as our spending is entirely geared towards that which we value most, our marriage too is grounded in our shared life goals.

Do you find that the attributes of frugality also serve to make you a better partner?