This Month On The Homestead: Of Berries and People 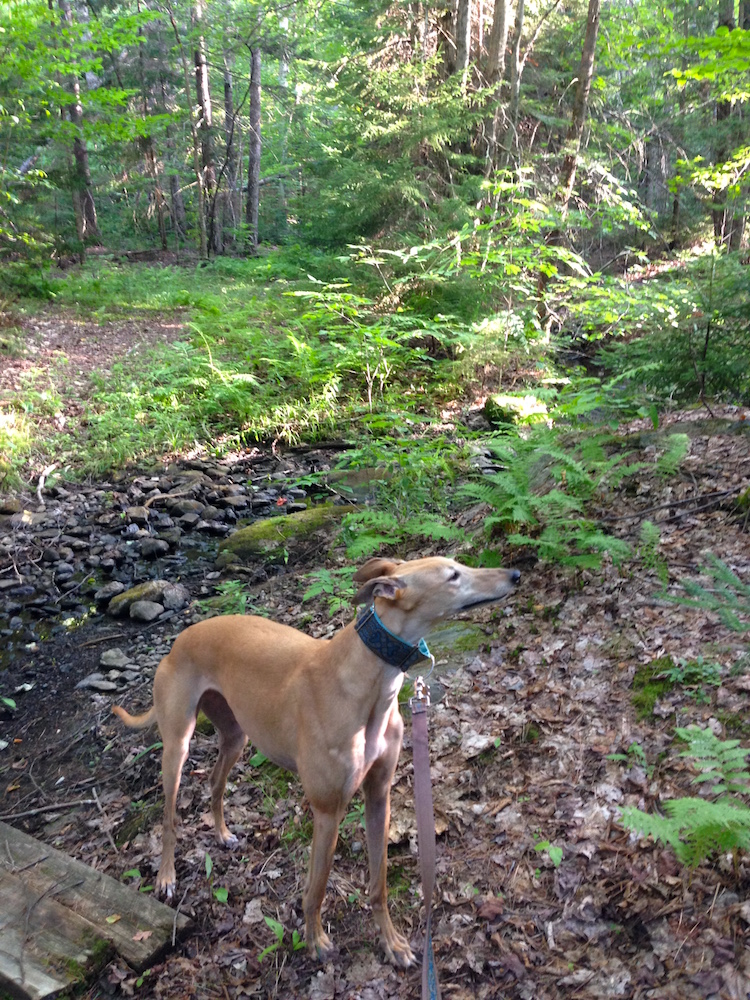 Frugal Hound sniffs the air on a hike

If you’re just tuning in, this is a new series in which I plan to document each month of our lives out here on our 66-acre Vermont homestead. After leaving urban Cambridge, MA to chart this wholly different life, we’re experiencing a constant learning curve of exploration! Check out last month’s iteration of the series here.

We reveled in summertime bounty during the month of July! Now several months into our tenure here on the homestead, Mr. Frugalwoods and I are starting to feel like we have a better handle on rural life (albeit a handle that’s a tad wobbly).

There’s still an endless list of projects to complete and skills to master, but we are ever-more confident in our role as digital homesteaders (that’s really the best term I can muster to describe what we do… what do you think? apt?).

Our flower beds were positively resplendent with lilies, irises, bee balm (love them!), daises, goldenrod, tall purple flowers on stalks, short purple flowers on stalks (that’s the technical term), and countless other bounties. I continue my weekly practice of making bouquets for our home, which facilitates a persistent celebration of this lush, warm season.

I’m letting the flower beds run rampant and unweeded; thus far, they’re doing well left to their own devices. There are far too many of them for me to tackle weeding and, for obvious reasons, I am not hiring a gardener. Plus half of the things erstwhile assumed (by untutored me) to be weeds have proven themselves actual flowers, so I’ve decided to simply permit them to turn feral, which is quite beautiful in its own way. Like in the way where you look at them and think “wow, it’s beautiful how much time I’ve saved by not weeding!” 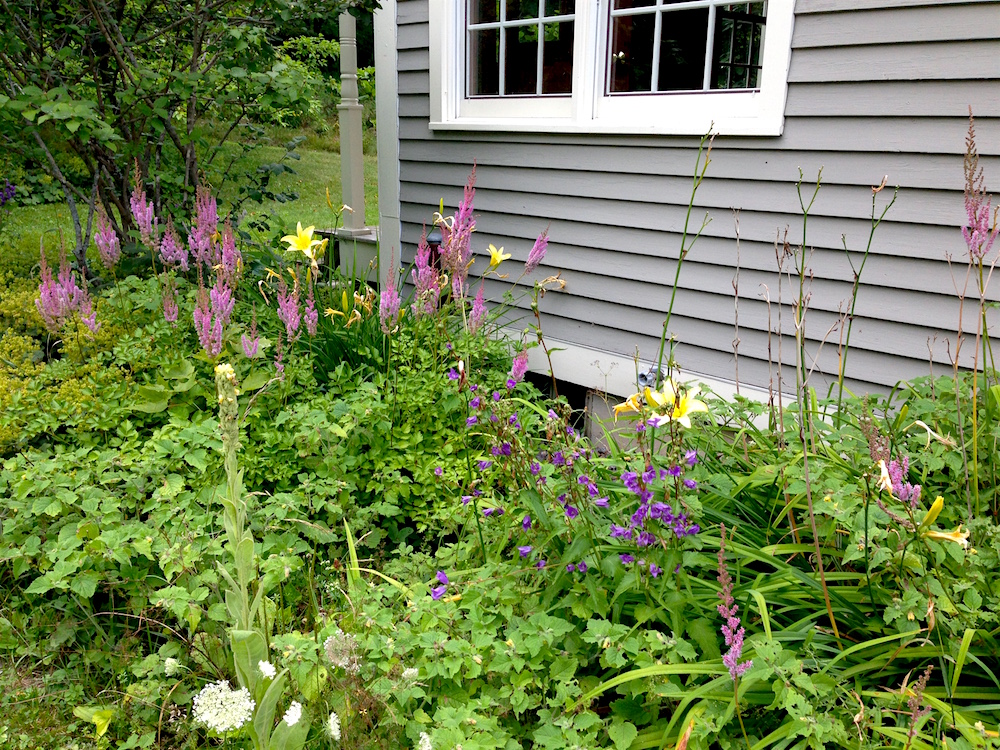 One of my many feral flower beds

The vegetable garden soldiers on despite an unusually dry month. As of this writing, everything is still alive–and one might even say thriving. Having never so much as planted a seed before, I’m pretty pleased with myself! I weed the garden every few days and Mr. FW waters it a few times a week.

We’d rather not water the veggies, but our recent lack of rain mandates such human intervention. Some nasty-smelling organic fish fertilizer also makes a sporadic appearance. Since veggies far outrank flowers in our agrarian priorities list, this is where I commit my gardening efforts.

Our tomatoes are becoming quite plump, the basil looks pretty chipper, the squash is on a rampage (we did not realize just how, shall we say, HUGE it was going to get… whoops), something is munching on the brussels sprout leaves, the salad greens are delicious, the pepper plants are booming, and the other herbs (sage, rosemary, thyme) are quite bushy.

I plan to make pesto at the end of the summer with the leftover basil and we’ll probably attempt to bring the other herbs inside for the winter. Other than that, it doesn’t look like we’ll have a major surplus of vegetables–it’s more of an eat-as-you-go garden this year. Hopefully next year we can get serious planting done to enable a canning and preserving operation (more new skills to learn, hooray!). 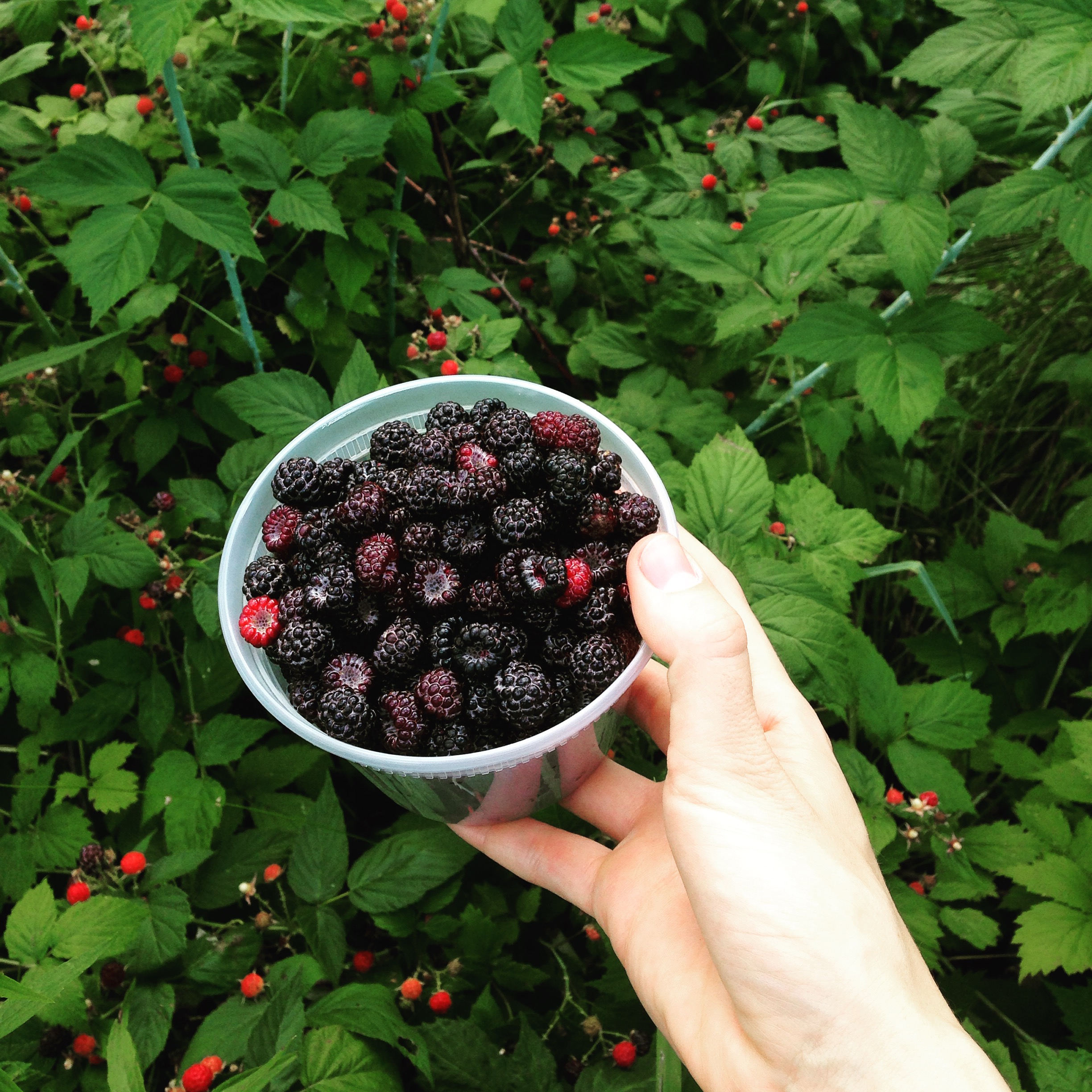 Something we do have a gigantic surplus of? BERRIES!!! OMG berries. The early part of July yielded a plethora of black raspberries and some red raspberries, which we ate with relish. I froze the extras and we’ll pop those out in the depths of winter for a shot of a-seasonal joy. We also discovered one solitary blueberry bush with teeny, tiny adorable blueberries. We ate them all.

As a well-known cherry devotee, I’m chagrined to report that thus far, our cherry stock is all of the poisonous variety (pin cherries and choke cherries). Although apparently you can make jam from them if they’re carefully cooked and strained. Otherwise their pits contain cyanide. So, uh, not sure I’ll be making that jam…

Furthermore, not to alarm anyone, but we appear to be on the precipice of a blackberry tsunami. There are blackberry bushes EVERYWHERE and it looks like most of them set berries. We picked some of the early ripened stock this week, but it appears that most will ripen later on in August. I’ve already spoken with a few friends about coming over to pick berries for their use. It’s going to be epic (now watch, none of them will ripen/they’ll all get eaten by bears). If you’re in the neighborhood, let me know if you’d like to come pick blackberries!

In typical city-person fashion, Mr. FW and I are continually scheming ways to capture wildlife on camera. We know our woods are populated by such exotic critters as bear, moose, deer, coyote, raccoon, chipmunk, owl, and more! But we have yet to clap eyes on most of these beasts of the forest. Except for the chipmunks, which torment poor Frugal Hound. Also a lone/random/lost? duck who we happened upon during an evening hike around our pond. Despite being leashed, Frugal Hound nearly enjoyed a duck snack. As I shared on Instagram, let’s just say this was not the Usain Bolt of the duck world… 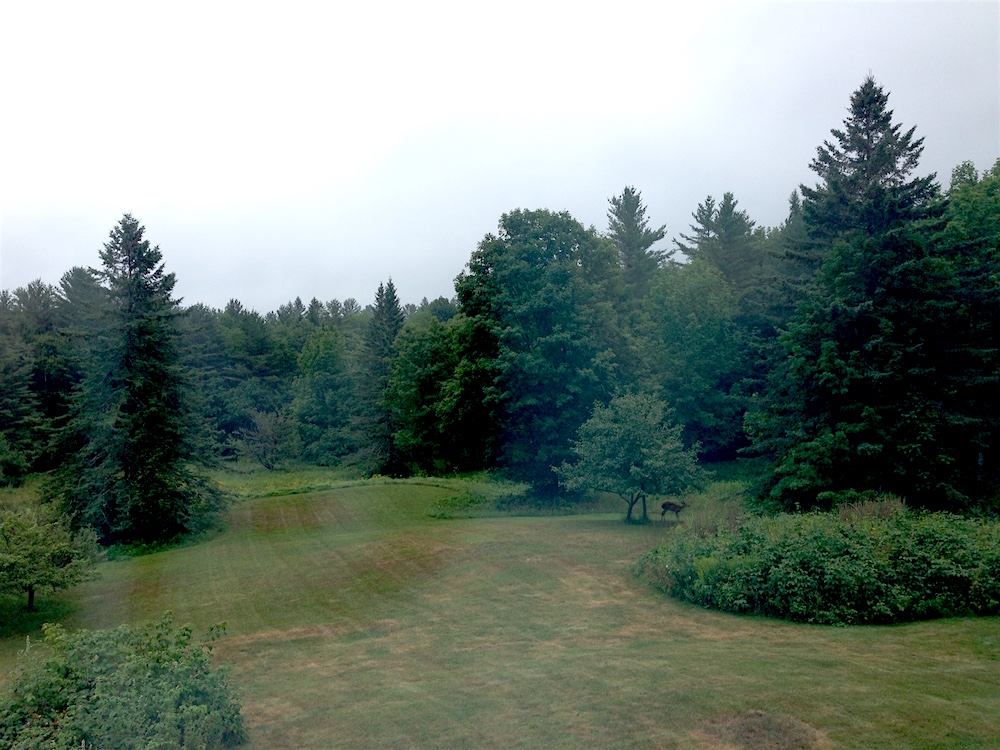 But a few dreams of the photographical type did come true this month: a coyote, a raccoon, and several deer were caught on our wildlife cam (which was a lot better than the previous pics of us walking back and forth past the camera). Additionally, a micro herd of deer–headed up by a young buck Mr. FW insists on calling “Chili”–has taken to munching the dropped apples ‘neath the apple trees in our yard each evening.

Mr. FW raked up most of the drops (nomenclature for dropped apples, so I learned), but Chili and friends found the remainders. Have you ever seen a deer try to consume an unripe apple whole? It’s an unusual sight prompting an internal monologue on whether or not one can perform the Heimlich on a wild animal…

Naturally, I now have about 8,476 blurry pictures of brown blobs darting across our lawn. Enjoy an example at right!

We also have some not-so-welcome wildlife in the form of a colony of paper wasps, who’ve taken up illegal residence in our potting shed. They made fast work of constructing a nest and, thanks to that, we now have an increasingly large perimeter of un-mowed grass surrounding the shed.

In a valiant attempt to ameliorate the situation (and end a few wasp lives), Mr. FW was promptly stung on the neck. How rude! Hence, we’ve retreated and are consulting the internet/our neighbors on how best to cope with these vile squatters. Our present plan is to just wait them out until winter.

Fortunately, we don’t need to use the potting shed and it’s situated far away enough from the house and the barn that we can give a wide berth when walking past. Yep, we’re from the city…

The Call Of The Winter Preparations 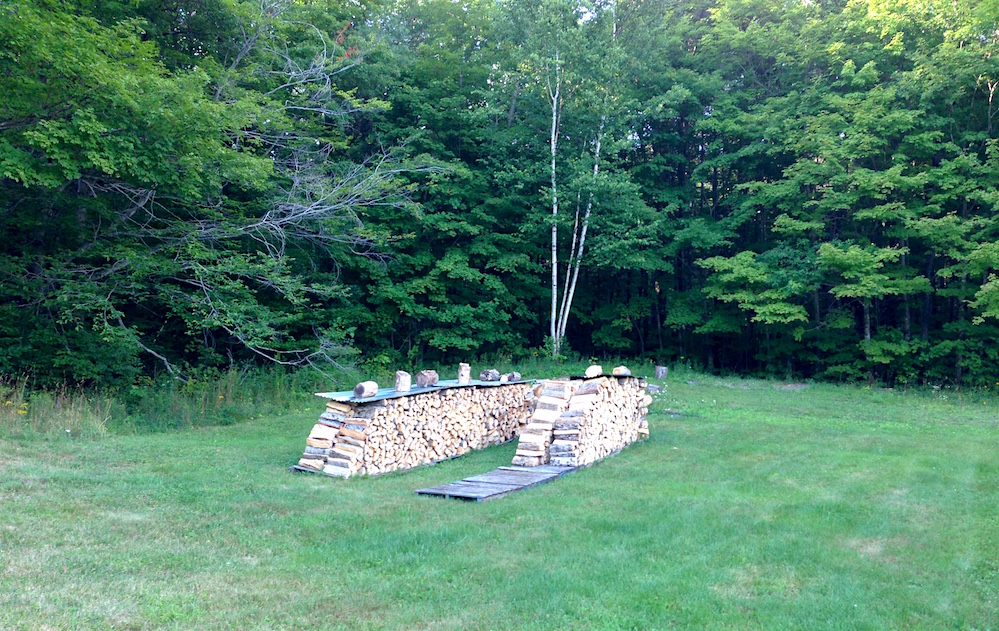 The depths of summer have us preparing for its foil season in every way we can imagine. Chiefly, firewood (and, you know, flinging ourselves about in the sunshine while wearing shorts and drinking white wine). Mr. FW continues his herculean efforts of felling trees, bucking logs, and splitting wood–all by himself and by hand. It’s a mighty task, but thus far he’s enjoying how very different this activity is from anything else he does. The balance we both strike between work with a keyboard and screen and physical labor out in nature is proving to be the balm we’d always yearned for in the city.

This month’s wood-related lesson is on cords! (In case you missed it, last month’s was all about how to put up firewood). So a “cord” is the unit of measure for firewood and it’s actually a precise measurement, not: “well I reckon that there looks like a cord of wood, hot dawg!” 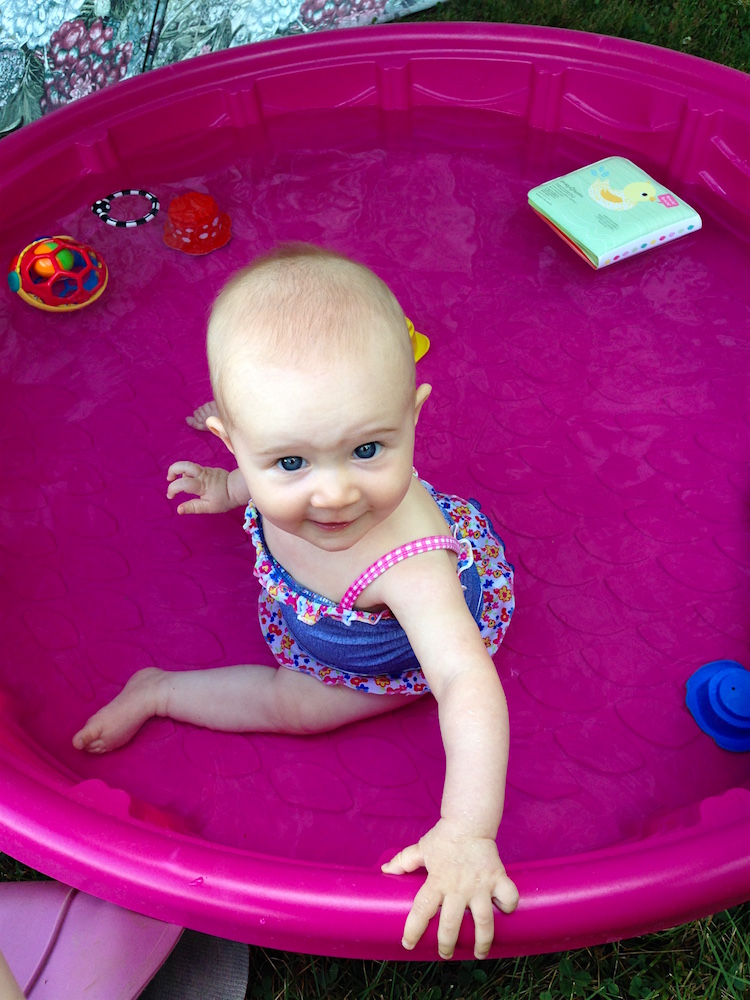 For our purposes, it’s useful to know how many cords of wood we burn this winter to inform our wood supply for future years. And in a commercial context, cords determine pricing. Mr. FW’s ultimate goal is to have three years worth of wood on hand, but since this is our first year, we’ll be going into this winter with just one year’s worth. We don’t know how many cords we’ll burn over the course of the winter, so having that exact measurement will be of supreme utility.

A cord is a stack of split wood measuring 8 feet long by 4 feet high by 4 feet wide. And if your wood stack doesn’t happen to conform to those precise measurements (such as ours), fear not, for there exists this online wood cord calculator. And you thought the internet was just for cat videos! According to this dandy calculator, we’re sitting on about 2.5 cords at present moment, with a loose goal of reaching 4 cords before hard freeze overtakes us.

The People Of Our Town

In a twist of irony that’s perhaps not surprising, we’re finding our rural life more connected, community-oriented, and people-filled than our erstwhile urban existence. Although we were constantly surrounded by throngs of people in the city, we never had a true community. Sure, we hung out with our friends, but aside from those specially planned and coordinated interactions, we felt more isolated in the city. Conversely, community abounds here in our tiny town. There’s a monthly potluck dinner, a monthly community lunch, a weekly baby storytime/play group, a coffee gathering every Saturday, continual events/parties, and the list goes on. 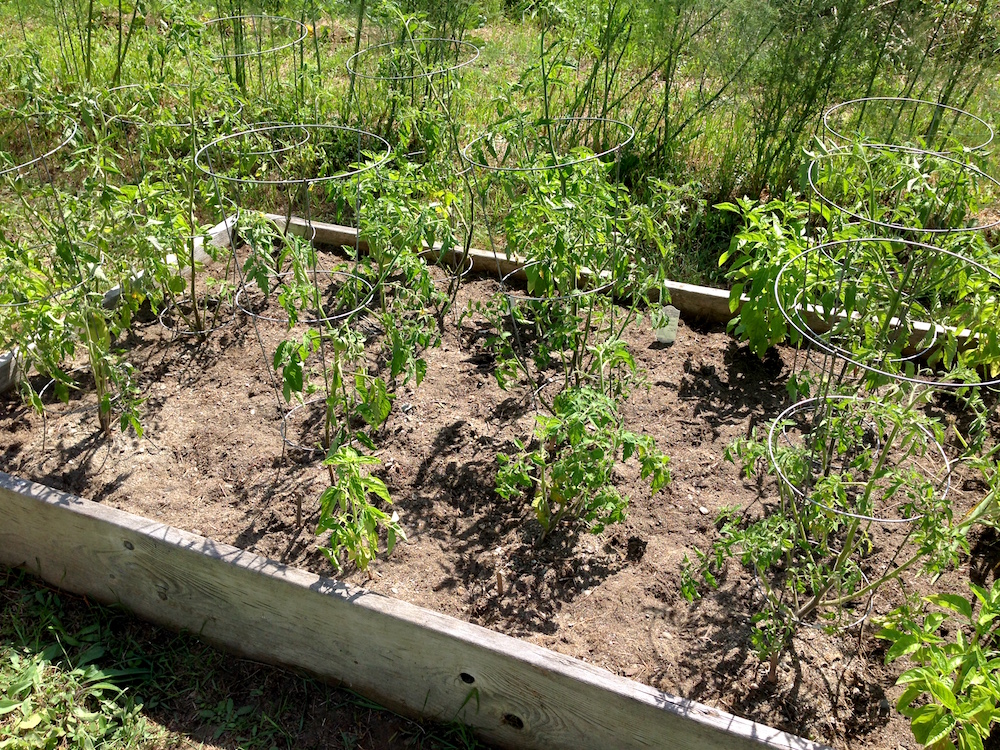 As I shared in my recent Day In The Life post, Mr. FW and I both joined committees/organizations and find ourselves happily engaged in various volunteer efforts in town and at our church. We participated in our town’s “day” celebration in July where the whole town turns out at the town center for a chicken BBQ, music, games, a (very short) parade, a silent auction (we won a bean pot!), and fireworks! Also this month was the town’s free summer camp for kids, at which Babywoods and I read stories to the kids (she only shrieked a few times, so we’ll consider it a success).

It’s not utopia, but it is what we hoped for. There’s no movie theater, no shopping mall, no fast food chains, and no beauty salons. In other words, it’s the type of place that’s perfect for frugal weirdos like us. 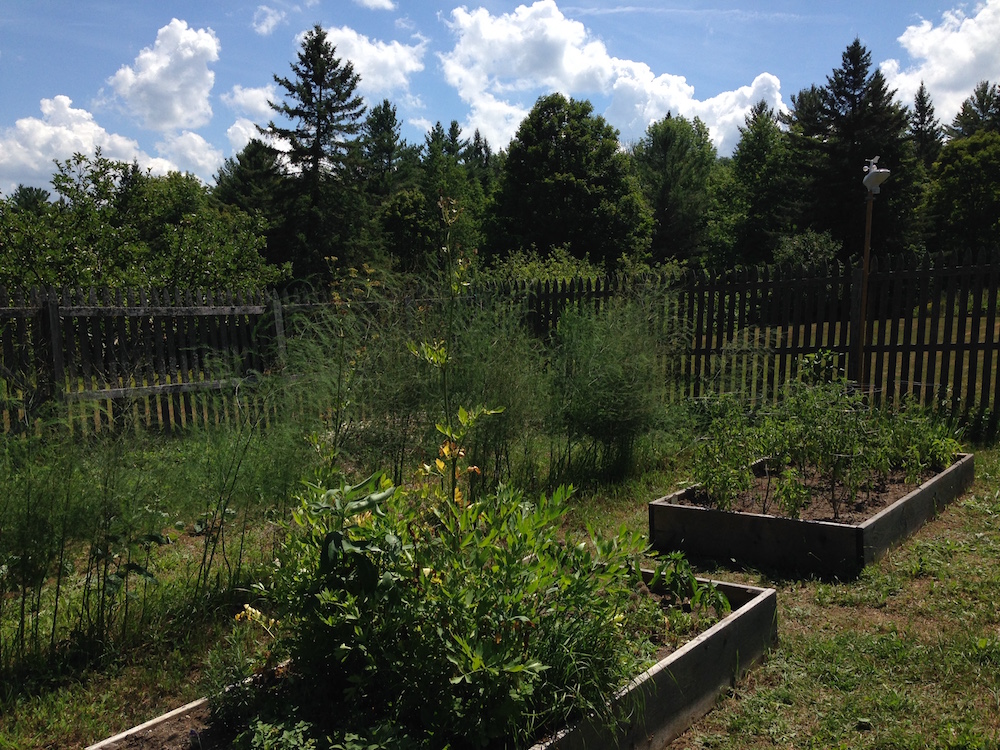 July also brought a wonderful visit from my parents who, in a feat of travel voracity, embarked on a month-long, meandering driving tour of the US, with a 10-day stay here at the homestead. Babywoods loved playing with her grandparents and it was a treat to show them around the farm.

A New Rhythm To Life

We continue to hone and refine our new rhythm of life, but the prevailing sentiment we express to each other every single day is our amazement at how incredibly happy we are out here. We feel profoundly fortunate.

While there’s a great deal more physical labor to perform, we’re finding it to be a fulfilling aspect of our days. We’re grounded and less stressed with our newfound ability to walk outside and into the woods at a moment’s notice. If one of us feels bummed or overwhelmed, we’ll just take a quick walk. Or do a few minutes of gardening. Or go pick some berries. Or simply stand on the back porch and inhale. Sounds ridiculous until you try it.

What’s new in your life this month?