This Month On The Homestead: Woodshop Woodworking 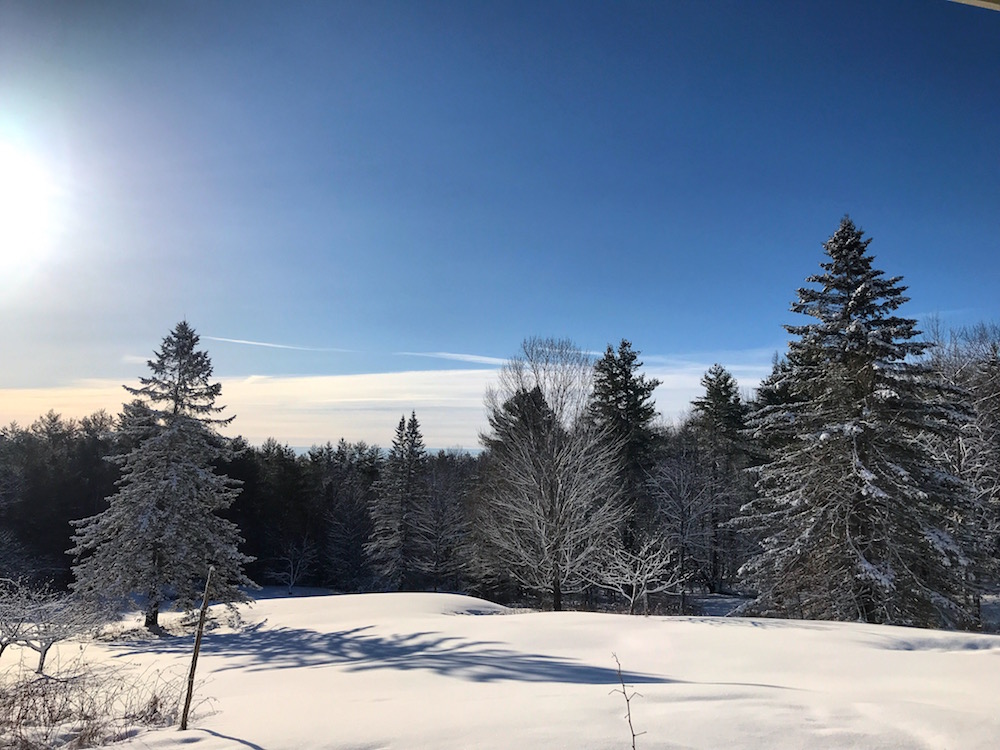 April: not a joke. This is real snow.

Remember how I said last month that the snow was receding? Well, it must’ve overheard my hubris and felt the need to prove me wrong. April was, uh, pretty snowy. Although our winters are indeed long up here in Vermont, this winter took it to the extreme and overstayed its welcome.

The snow would melt, tempting us with a glimpse of bare earth, only to jealously cover the nascent grass with a colorless slate. Back and forth we went all April long, with snow exacting its final revenge with one last (admittedly lovely) snowfall on April 30th. Seriously, snow? You just couldn’t let April go. 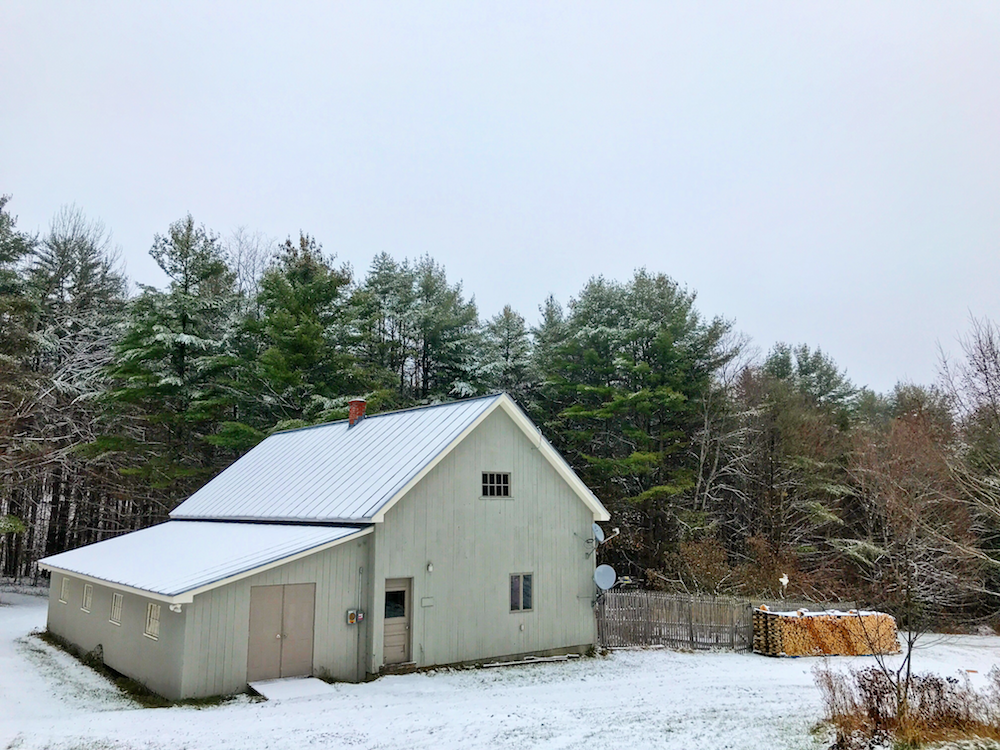 Our barn and attached lean-to

All this tardy snow gave us the opportunity to catch up on indoor chores. We knew the earth stood poised under the snow, ready for us to till and prepare and plant, but all we could do was plan and plot from the snowless warmth of our woodstove-heated home. Mr. Frugalwoods seized on this late winter to organize and clean out the barn and lean-to (the lean-to being a little building attached to the side of the barn used for tool and equipment storage).

Since moving here two years ago, the barn–which was built by a previous owner as a woodshop, not an animal barn–has served as the catchall for tools, lumber, equipment, dead bugs, and outside gear. It was a hot mess, to put it mildly. Mr. FW’s had his eye on bringing some semblance of order to the situation for months now (I like to think he was inspired by my whole house decluttering project, but I think it might be more that he likes to tinker around out there alone).

Thanks to his newfound ability to haul lumber and tools (hat tip to our new-to-us truck), Mr. FW built shelving units to hold all of the various oils and gases required by the tractor, mower, trimmer, and chainsaw. He configured clever little storage racks and hooks for rakes and axes. He even built a custom chainsaw pocket on the side of one of the shelves to slot the saw into. In his new tool chest, he arranged all of his wrenches and nuts and bolts and tools of all kindses. 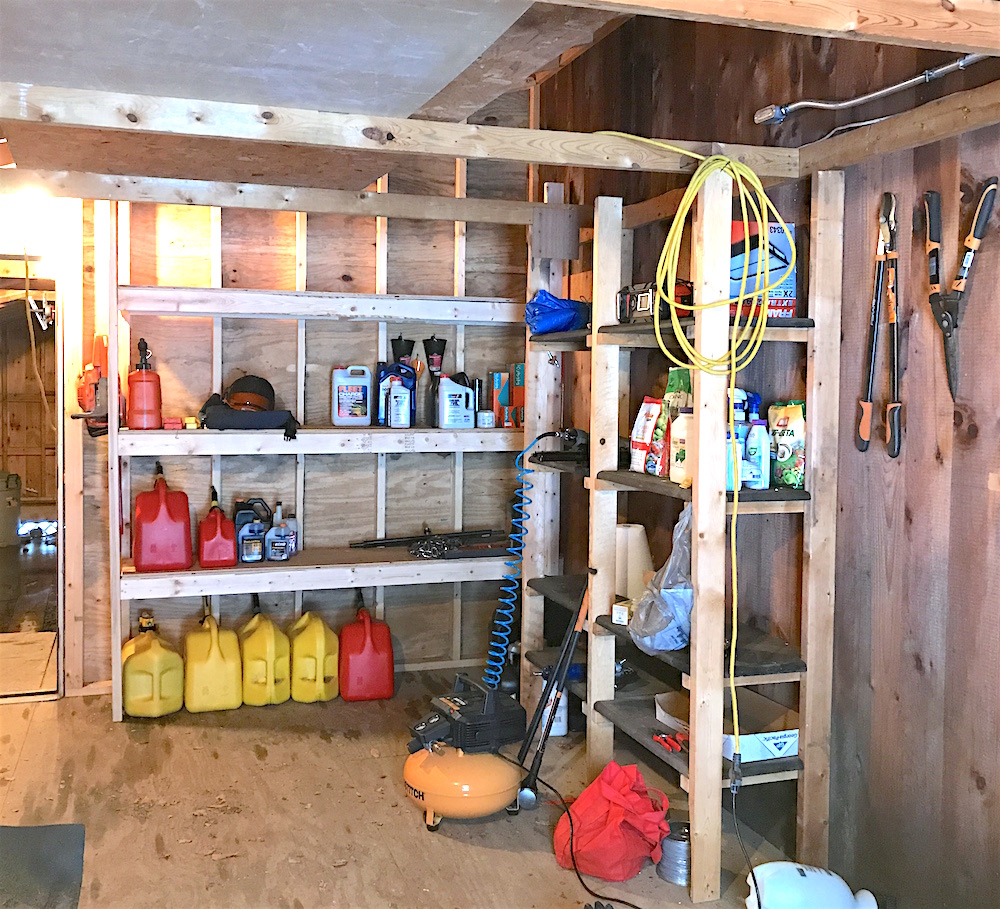 The shelving units Mr. FW built in our lean-to

He sifted through unpacked moving boxes and flattened the cardboard to be used in our vegetable gardens to hold mulch. He built sawhorses in order to allow him to build more things. He reconfigured his gardening supplies. From a miscellaneous stack of stuff, he created order and empty space. It’s not quite a done deal yet, but it’s looking pretty darn good in there. Babywoods likes to go in the barn and “take a walk” in order to view all of the tools and whisper their names under her breath in a reverent tone that imbues the words “miter saw” with far more gravity than they deserve. She then turns abruptly to a parent and reports, “I will learn to use it when I’m older.” Sure thing, Babywoods.

Mr. FW and I are both lovers of organization since it makes it easier to live and work and do projects. We hate rifling around to find the right wrench and we hate clutter. Having what we need laid out in an orderly fashion means we have more time to do stuff and spend less time looking for stuff. It’s also a chance to give away anything we no longer need. I maintain a revolving box of giveaways since I’m forever finding stuff we don’t need. No reason to keep it–move it along into the hands of someone who needs it. (p.s. if anyone local needs a handheld vacuum, I am looking to give one away!) 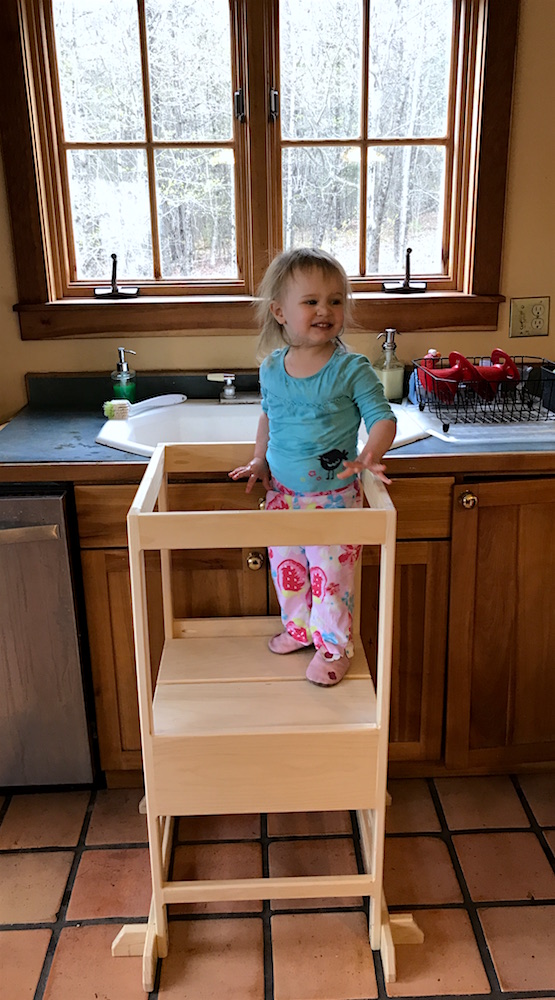 Babywoods washing dishes in her tower of power

All of this organizing–along with the advent of our truck–sent Mr. FW into a woodworking frenzy. He bought a used SawStop table saw, he bought lumber, he bought other woody stuff and then, he got to work. In addition to his organizational shelves and hooks and sawhorses, he built what is now known as the Toddler Tower Of Power. I’ve had my eye on these learning towers for awhile now, but at $200 new (and not much less used), I haven’t been able to bring myself to buy one. Babywoods is keen to “help” us in the kitchen and will industriously drag a chair up to the counter or sink in order to get in on the cooking or dishwashing action. The chair thing was kind of working, but one of us had to stand behind her so she wouldn’t tip out of the chair, which made cooking difficult.

At any rate, I was talking about this tower idea and Mr. FW offered to build one. Perfect! He got to test out his new tools, refresh his skills, and make Babywoods a totally awesome way to reach everything in the kitchen (what on earth were we THINKING?! J/k she loves it). She is a big fan of standing in it at the kitchen sink to “wash” dishes (so helpful, again). I love that she can now safely stand at counter height and partake in all things kitchen. Mr. FW plans to teach her how to cook before too long here, so this seems like a great introduction to the process.  She’s pretty good at putting sandwiches together and can even sort of, kind of help me measure out the ingredients for our homemade bread (what’s a little extra yeast between friends?).

I sincerely hope her enthusiasm for chores carries over into her adolescence, because she is ALL about getting her hands on the laundry and the broom and the vacuum… it’s super helpful to have a 2.5 year old dragging laundry across the room, let me tell you…

Now that I’ve seen Mr. FW’s woodworking skillz in action, I’ve commissioned an entire wishlist of items for him to make. Well, actually only two things right now: a trash and recycling center for our kitchen (we are forever overfilling our recycling bin and I want two larger bins so we can sort out our two types of recycling right there in the comfort of our own kitchen) and a bench next to the creek behind our house where Babywoods loves to play (and I do not love sitting on a log to nurse Littlewoods). A girl can dream.

Should you so desire to build your very own Toddler Tower Of Power, Mr. FW used this plan with just a few modifications. 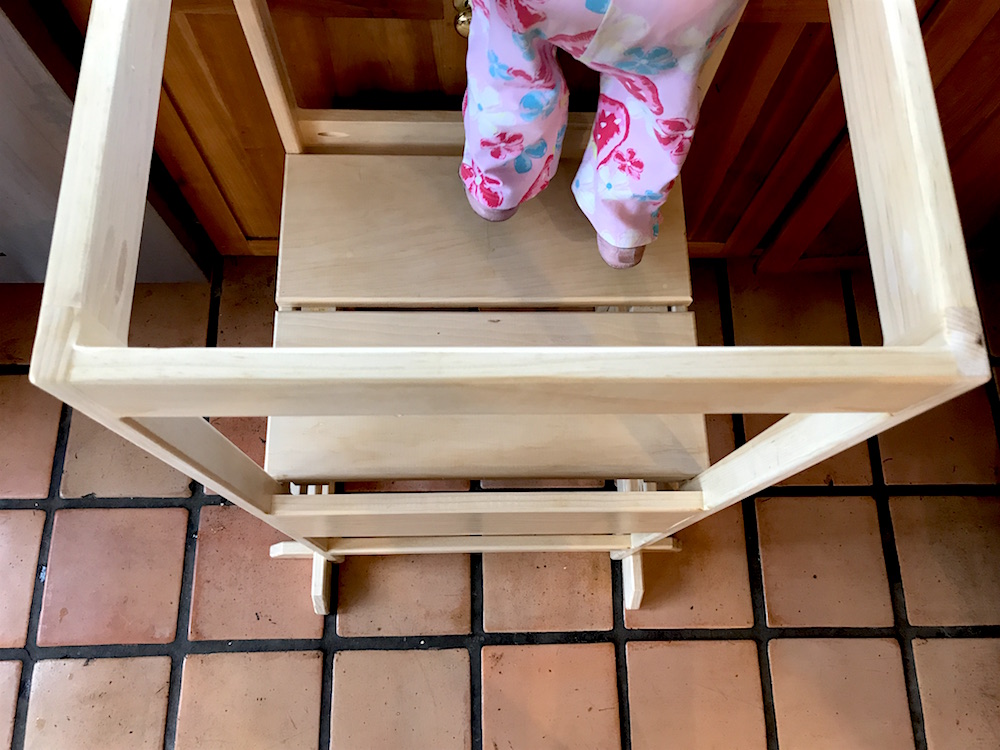 Arial view of the tower

Next up, he took the storm windows off the exterior of our doors and windows and put on the screens for summer! We don’t have air conditioning, so we need those screens to let cool breezes blow through the house. It doesn’t get terribly hot here in the summer, so we’re usually fine with this natural cooling. And then we’re super hot for about a week in August and curse our absence of air conditioning. Then it’s fall the next week and we put our sweaters back on and forget all about that ephemeral season known as summer. 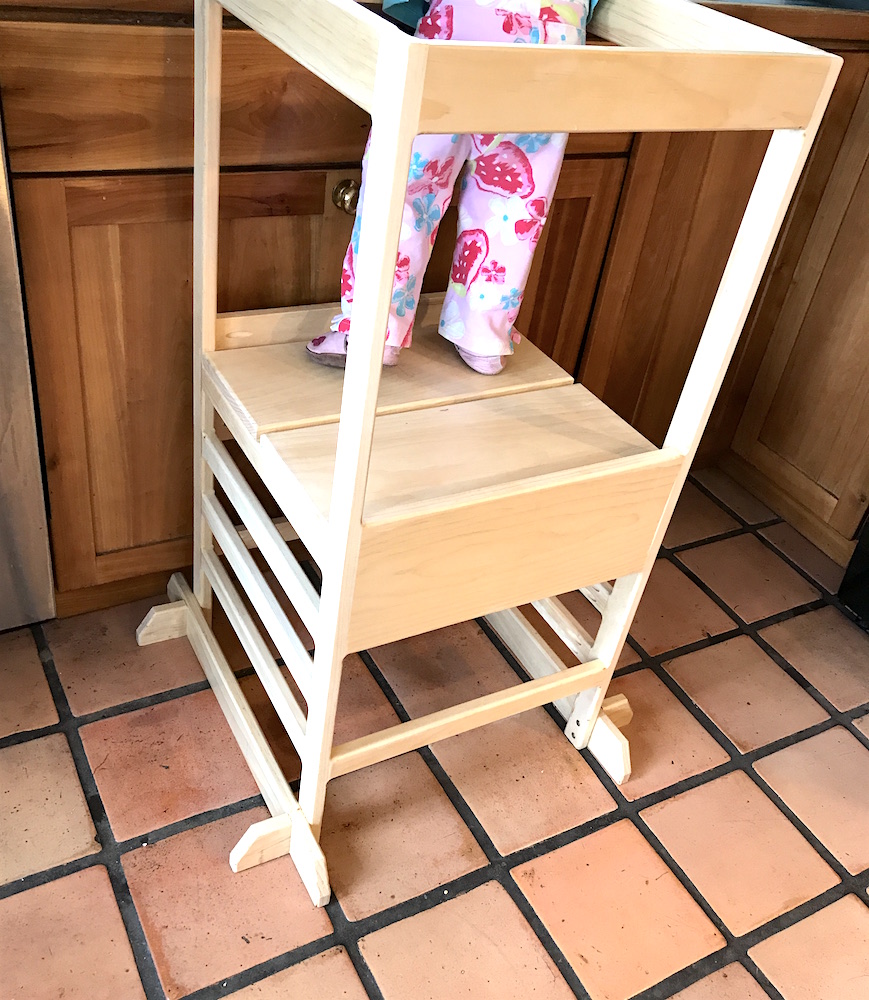 Side view of the tower steps (and Babywoods’ jazzy pants)

I shared the details of our vegetable seed starting project last month and this month, the starts just kept right on growing. We’ll likely put them in the garden in late May–assuming we’re frost-free at that point. As I’ve written before, growing your own food is no joke. It’s not easy or even particularly cheap and it’s time consuming. It’s worth it to us, but it’s an eye opening view of how challenging it is to make food.

Our veggie gardens also serve as a reminder to us of how fortunate we are that we don’t need to earn an income from our land. We are profoundly lucky that we’re able to choose this lifestyle, but that we’re not reliant on it for our livelihood. We’re continually awed by our farmer neighbors and the tremendous work they do in order to raise food and farm for a living.

An unwanted critter took up residence inside our Prius this month, which we knew because it kept shredding tissues from my center console tissue box (I never leave home with snacks or tissues! Or my children–I swear I don’t forget them). Not cool. So, we set a few traps, which seemed to eradicate the, ahem, problem and provide a few mouse snacks for our neighborhood owl population. However. After a few successful trappings, we realized that more mice were somehow getting into the car. This was not an isolated, solitary mouse event. It was more like a revolving door of mouse families coming to hang out in our car. Gross, you guys. Unsure of what our next offensive move should be, Mr. FW took to the internets and figured out that mouse infiltration is, like, a THING in Priuses. Great. 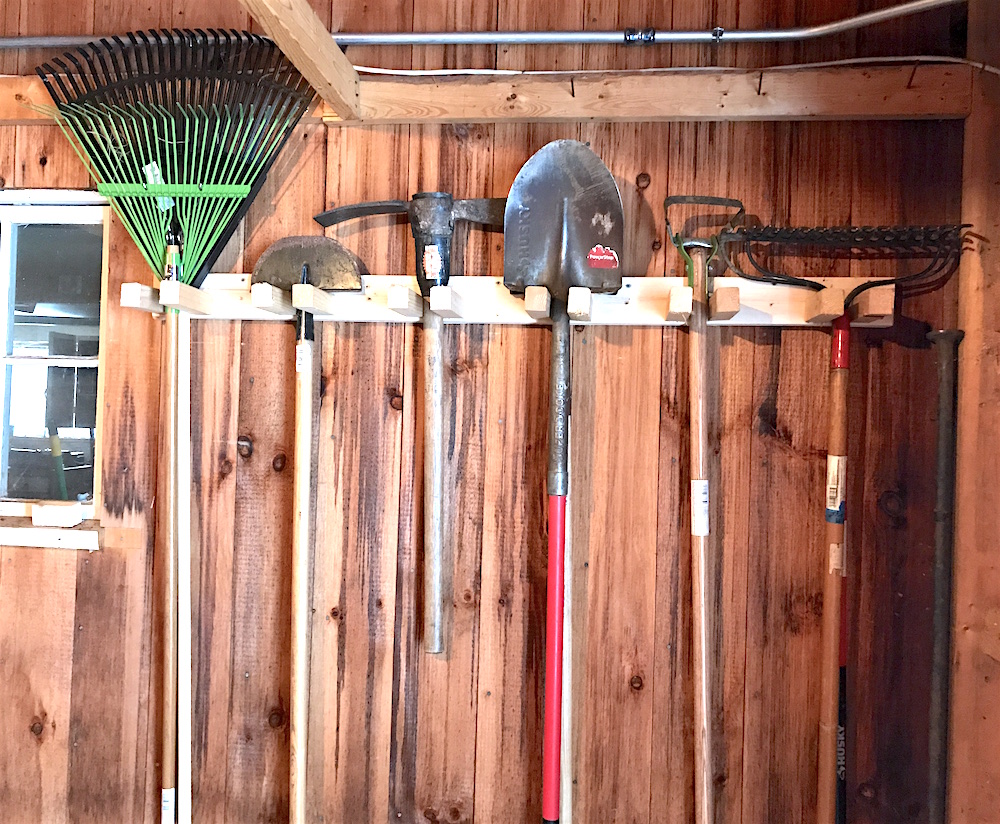 Mr. FW built this handy garden tool rack (also, you should be glad I didn’t include a photo of the mouse… )

Luckily, the internet recommended a fairly easy fix: replace the cabin air filter. No problem. Mr. FW bought a new filter, dutifully followed the internet’s instructions on how to replace it, and even went the extra step of putting dryer sheets in the glove compartment as these are apparently a mouse deterrent. Things were good. No, things were great! When you go from having a rodent circus inside your car to not having a rodent circus inside your car, you are super jazzed with life. We thought we had it made in the shade.

And then, last week, the telltale heart beat again. I found another shredded tissue…

TO BE CONTINUED NEXT MONTH (because hopefully we figure out a new solution by then. If not, just forget I ever mentioned it and secretly judge me for harboring mice in my vehicle… ).

Onward to May, frugal comrades!