This Month On The Homestead: Burning Brush and The Life and Times of Firewood 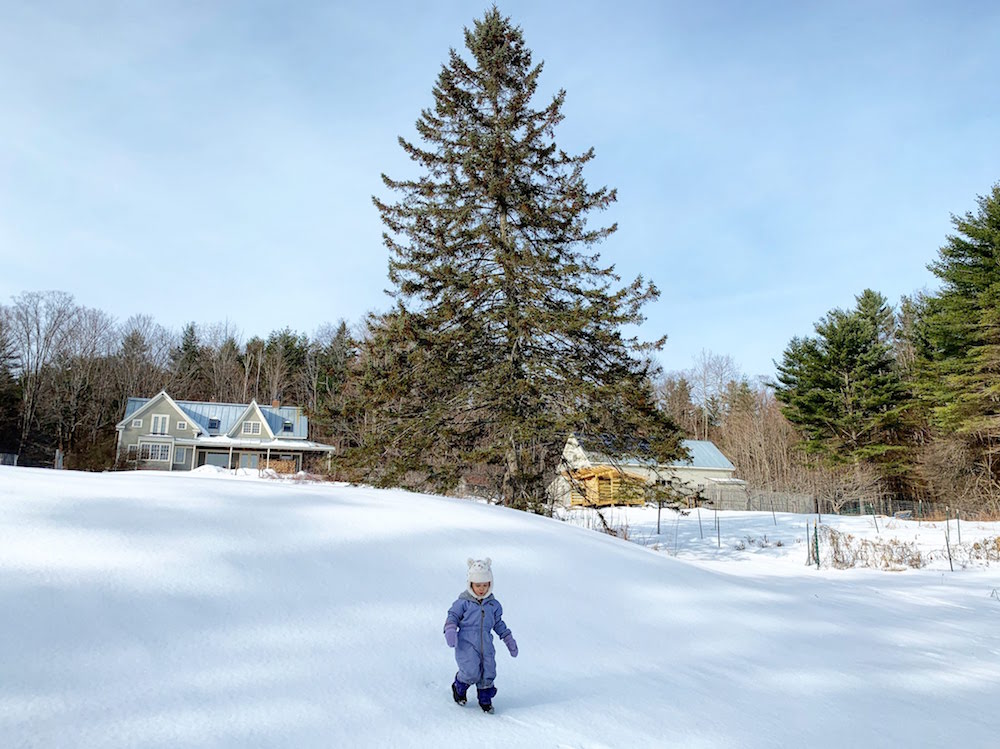 Kidwoods traversing in search of snow to eat

Most of what happened in December related to our Christmas festivities, which I detailed earlier this week in Laugh So You Don’t Cry: What It’s Really Like to Celebrate Christmas With Little Kids.

Other than that whole situation, I can report that it is still winter on the homestead. We’re still covered in snow, although not as much as in November. It’s white and fluffy. Except for the spots where it’s icy and thin. And the spots where it’s both thick and icy. Also, it is cold.

If you’re just tuning in, this is a recurring series in which I document each month of our lives out here on our 66-acre Vermont homestead. After leaving urban Cambridge, MA in May 2016 to chart this wholly different life, we’re experiencing a constant learning curve of exploration and plenty of stupid novice moments. Check out last month’s installment here and enjoy the best and worst (ok, mostly the worst) moments of our first year on the homestead here. Wondering if it’s less expensive to live rurally? Check out: City vs. Country: Which Is Cheaper? The Ultimate Cost Of Living Showdown. 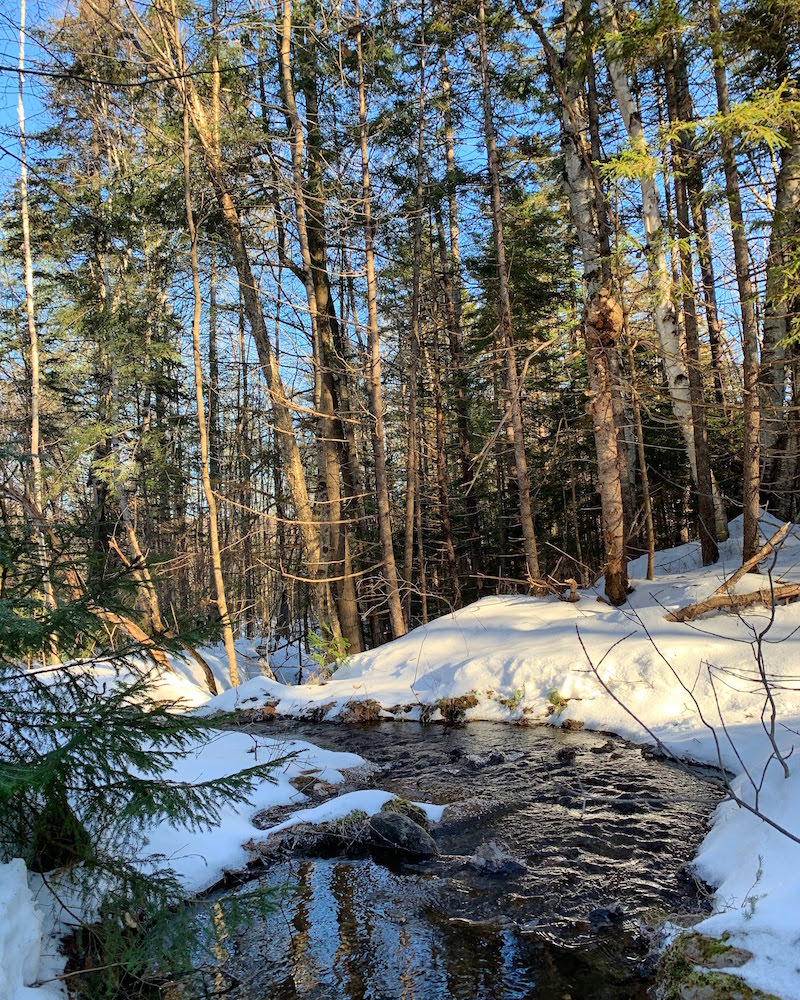 Mr. Frugalwoods continued his valiant, year-round efforts to maintain our hiking/snowshoeing trails. Trees keep falling across them (rude) and so he keeps heading into the woods with his chainsaw to clear paths. The ability to hike on our land is one of the reasons we bought so much of it and so Mr. FW’s put in a lot of labor to build, extend, enhance, and maintain our trail system.

We’re experiencing frequent blow downs this winter (technical term for when a tree falls over), due in part to excessive quantities of wet, heavy snow. Enough wet, heavy snow draped over branches–particularly of a tree that’s already past its prime or diseased or compromised in some other way–will topple it over. And, it seems, more often than not, right across our hiking trails.

No worries as Mr. FW reports he is “getting better at running a chainsaw on snowshoes.” If you’d like to read more about Mr. FW’s trail clearing and building endeavors, check out: This Month On The Homestead: Trail Building 101 And A Second Birthday Party. 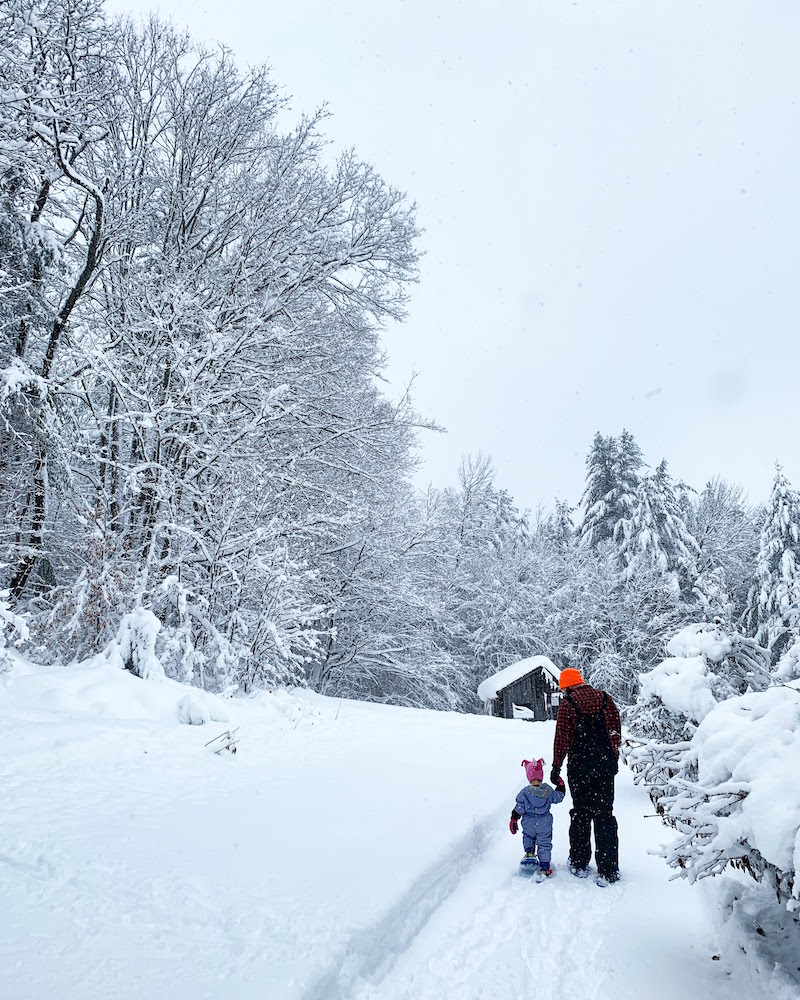 Ok actually toddler snowshoes, but “baby snowshoes” conjures a more ridiculous image. We bought Kidwoods (who is three years old) a pair of mini snowshoes for $1 at a garage sale last summer and we broke them out last month!

Though hesitant at first–she is not a daring person–she warmed up to the idea when she realized it was going to be a Kidwoods/Daddywoods trip (minus mama and baby sister).

The two of them snowshoe clomped around and around the house and barn and I think she really got the hang of it! Mr. FW and I love snowshoeing and so the sooner we can get our kids on the trail with us (and out of the baby carrier or pull-behind sled), the better! Littlewoods, for her part, is still working on standing up, so I think snowshoes are a few years off for her.

The Life and Times of Our Firewood

I should start a blog dedicated solely to the life and times of our wood. So many adventures, so many re-locations, so much permutation is the life of our firewood. We also seem to be in a constant state of wood flux. Since we heat our home with our woodstove, wood is always in our house, near our house, and around our house. It’s everywhere. I had no idea how apt the “woods” part of my name would become.

Due to our intense, frigid winter (and it’s only December!!!), we’re devouring our firewood stash. Fortunately, Mr. FW has several years’ worth of firewood harvested, split, and stacked in the woodshed (more like wood palace) he built this summer. Without that buffer, we very well might’ve run out of wood this year. Since moving here, we’ve typically burned just three cords of wood per winter (wondering what a cord is? Check this out). This year, however, we’d burned an entire cord by mid-December. That does not bode well. Seeing as winter doesn’t end until April, we’re on track to surpass our previous three cord metric.

Wood on the move

In mid-December, Mr. FW moved one cord of wood from the woodshed up to the porch. The porch wood rack he built a few years ago holds 1.5 cords stacked in three rows (each row holds 1/2 a cord). We’d used two of those rows and so it was time to re-stock the stash.

Mr. FW likes to refill our porch wood rack when weather conditions are amenable/convenient for the task (i.e. not in the middle of a blizzard). He picked a day where we didn’t have a lot of snow on ground (that’s a relative appraisal), which is ideal since he uses the tractor for this task.

Thanks to the new front chains on the tractor, he reports the refill was much easier than in years past. In order to position the tractor bucket towards the house, he has to make an uphill turn and this didn’t go too well without chains: the front tires slid on the hill as opposed to turning. Sub-optimal. The chains, however, made this maneuver super easy. Counterintuitively, the chains also saved our grass. Last year, the tractor decimated swaths of grass during wood rack refills (on account of all the tire slipping), but with the chains? Nary a scratch to the old sod. Mr. FW and I remark often that it’s a good thing we’re not sod farmers because our grass is atrocious. 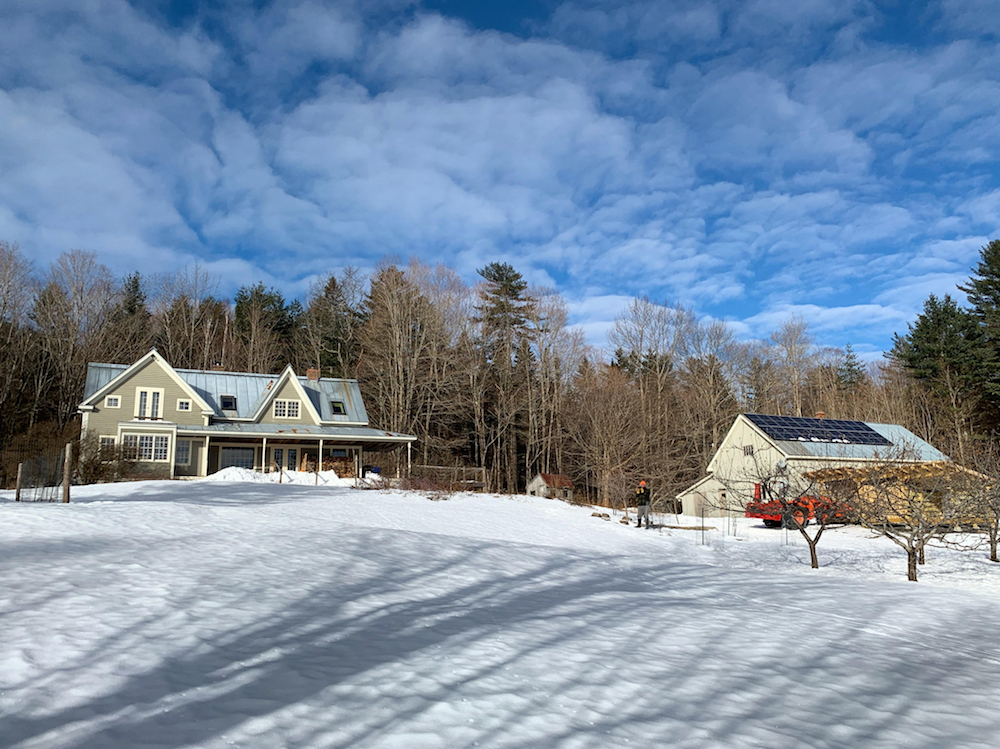 You expect me to say that our child(ren) went sledding. And yes, I did coax Kidwoods down the hill in the sled with me once. But she was much more interested in scooting down hills on her rump because that way she could control her speed. And also stop to snack on snow anytime she passed a delectable snow patch (which, apparently, we have a lot of in our yard). Indeed, the kids were not the ones who loved sledding this month.

Mr. FW and I sledded down our hill together. Not with either kid, just the two of us. I was outside with Kidwoods and he was outside stacking wood. We looked at each other across the expanse of our yard, I waved at the sled, he gave a thumbs up, and jogged over to me. We hopped in the sled together and sailed down the hill. Just once. That’s all we had time for. But it was a perfect moment of connection. A mini date. A reminder of what we used to be like before we had children and a homestead and endless responsibilities. As we glide* towards 11 years of marriage, we still love sledding down a hill together.

*I initially had “barrel.” Then I tried “stagger,” “careen,” and “tumble.” You can see why I landed on glide. 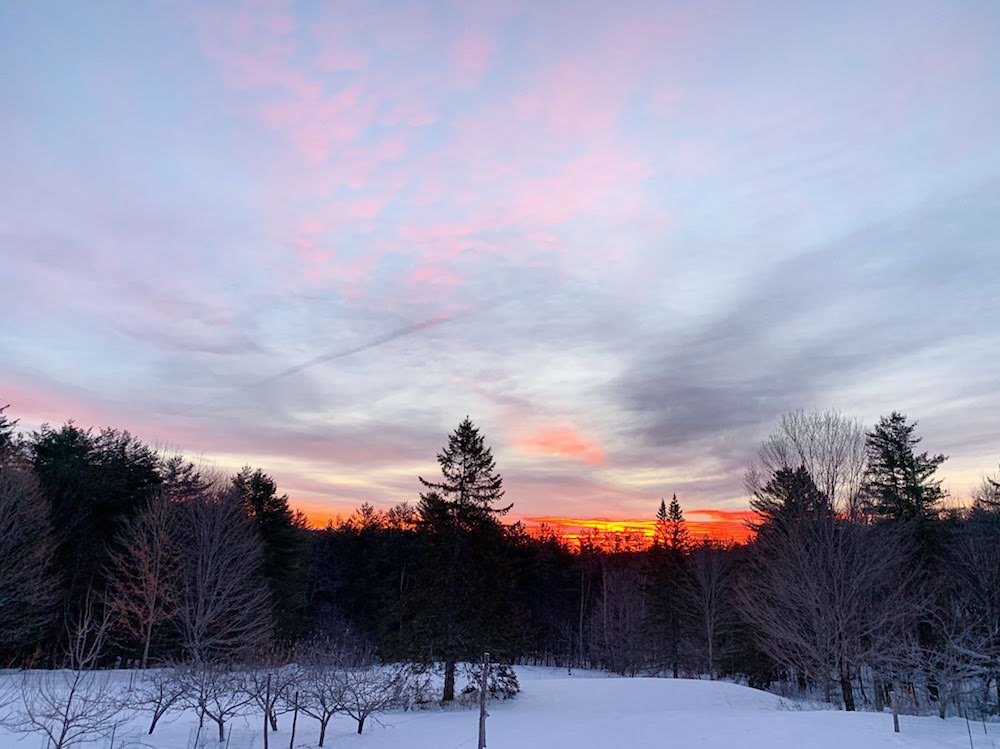 Sunrise as seen from our back porch

Intentional burning! We were the not-so-proud owners of a self-generated monstrous pile of brush. Located in the field below our house, this brush pile contained the results of a spring and summer’s worth of pruning and cutting.

Included were the tops of trees Mr. FW’d cut from the edge of our field to allow more sunlight to reach our vegetable gardens and apple trees along with miscellaneous yard detritus too small to be firewood, but too large to be compost. The pile–which was oval shaped–measured 6 feet tall, about 14 feet long, and 5 feet wide.

Since this was the first brush pile we’ve ever burned, we decided it’d be wise to wait for ideal conditions on account of not wanting to get a reputation for being the people who burned our house down in the middle of winter. Here’s what we decided were ideal conditions:

Optimal safety conditions! Mr. FW used our famous flame weeder to torch the pile. He reports that he, “turned it [aforementioned flame weeder] on full blast and pointed it towards the middle of the pile.” He tended the fire as it burned and used the tractor bucket to periodically push the edges of the bonfire towards the middle to ensure everything burned wholly. True to predictions, it rained the next day, which extinguished the remaining embers. We were surprised at how quickly the pile burned down and, given its speed, I didn’t get any photos. I planned to run out during the girls’ afternoon naps to capture some hot fire action, but it was almost completely burned down by 2pm. Plus I really wanted to eat a snack instead, so I opted to forgo the sojourn. 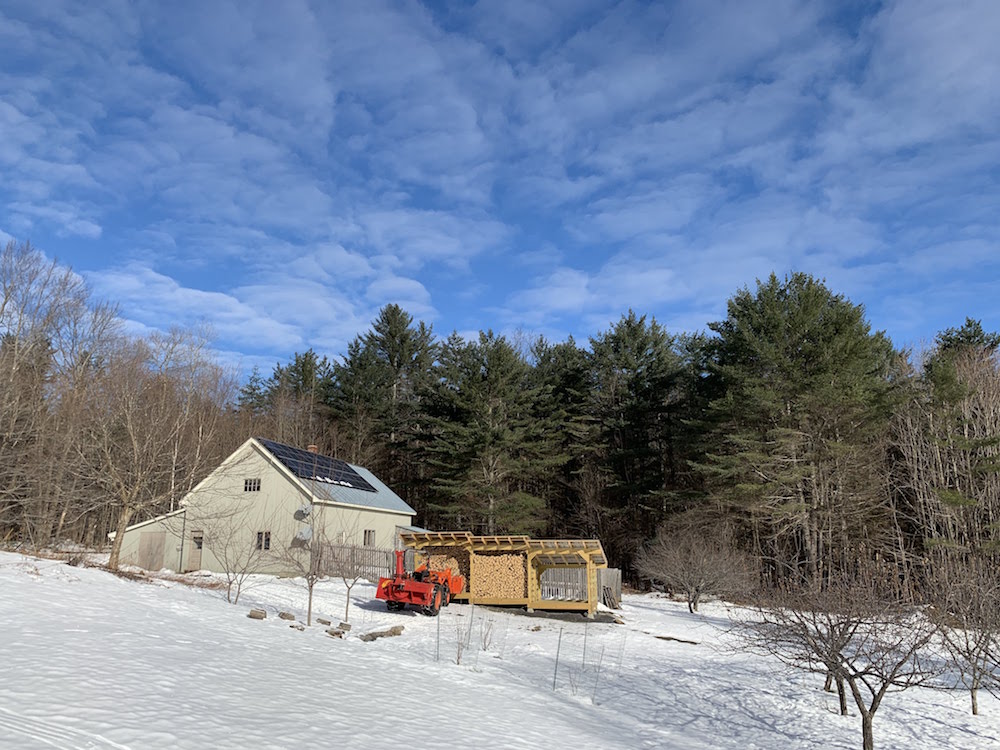 Now that I’ve FINALLY (it only took me a year… ) written up the background information on our solar panels, I’ll include a solar update every month in this series. This is the only way for me to remember that: a) I have solar; b) you all would like to be updated on it.

In December we generated 271 kWh, which is a lot more than in November for the simple fact that we had a lot less snow covering the panels in December.

This has been your solar production update. You’re welcome.

While I only document homestead life once a month here on the blog, I post photos to Instagram (almost every day!) and updates to Facebook with much greater regularity. Join me there if you want more of our frugal woods. Some folks have asked about this and yes, I do try to post a picture to Instagram every day and–unlike with many other things in my life–I actually have a pretty good track record. If you’re craving more homestead pics, Instagram is your best bet.

And if you want to make sure you don’t miss a post here, sign-up for my handy dandy email list in the box below. You’ll get a message from me if you do… On to January, frugal comrades!

How was December on your own personal homestead?