This Month On The Homestead: Vegetables, Fruits, And Nuts!

If you’re just tuning in, this is a recurring series in which I document each month of our lives out here on our 66-acre Vermont homestead. After leaving urban Cambridge, MA in May 2016 to chart this wholly different life, we’re experiencing a constant learning curve of exploration (and plenty of stupid novice moments). Check out last month’s installment here and enjoy the best and worst moments of our first year on the homestead here. 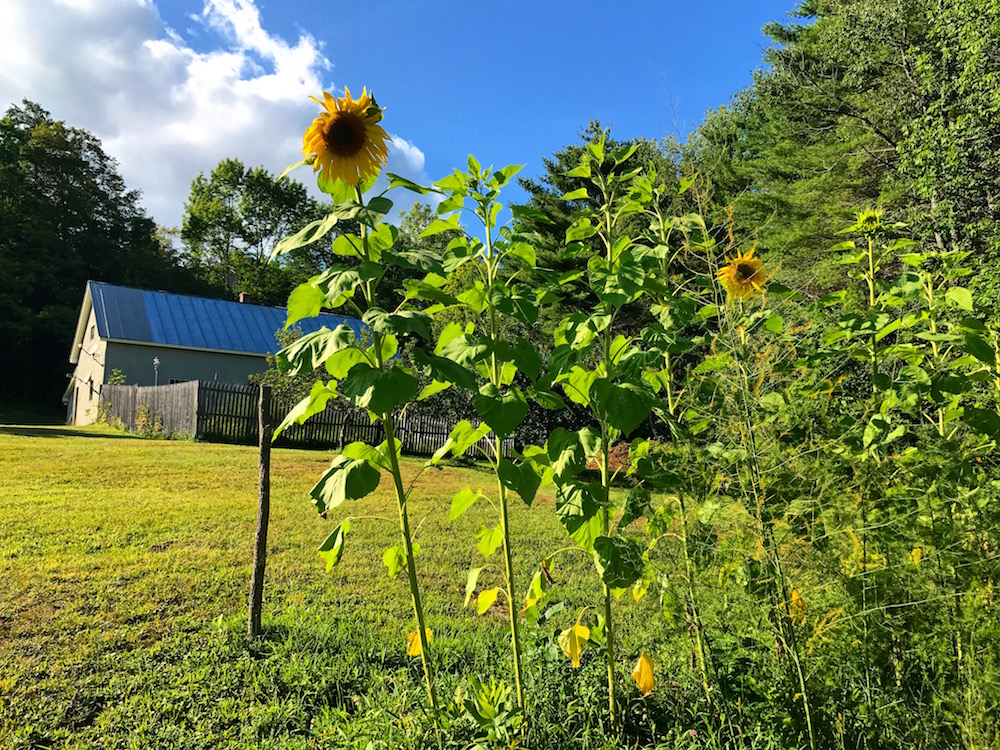 August in the garden: sunflowers!!!

August can be summed up as follows: vegetables! Indeed, this was the month our garden produced in near overwhelming abundance. Everything here is lusciously, verdantly green.

It’s not hot, exactly, as our part of Vermont rarely experiences what one would call “hot” temperatures, but it certainly was warm. Windows are open everywhere (since air conditioning is as rare as a 90-degree day here) and people are outside. It’s the month to savor the languid procession of summer in anticipation of the crisp, favorite fall.

It’s the month to reap what you’ve sown and swim in your creek and contemplate your woodstove’s role in the months to come.

Since Babywoods and I were away for the bulk of August, Mr. Frugalwoods was busily harvesting, maintaining, and preserving the bounty of our land. Mr. FW began his garden-related labors back in March when he started a bevy of veggie plants from seeds–tomatoes, peppers, pole beans, sunflowers, cucumbers (some of them), and pumpkins (some of them)–inside our upstairs bathroom under grow lights. Since the Vermont growing season is so brief (we’re in plant hardiness zone 4 for all you gardening aficionados), most vegetables aren’t able to come to maturity outside during the timeframe of late May to mid-September. To combat this, one must give fledging plants a head start indoors where it’s nice and warm. 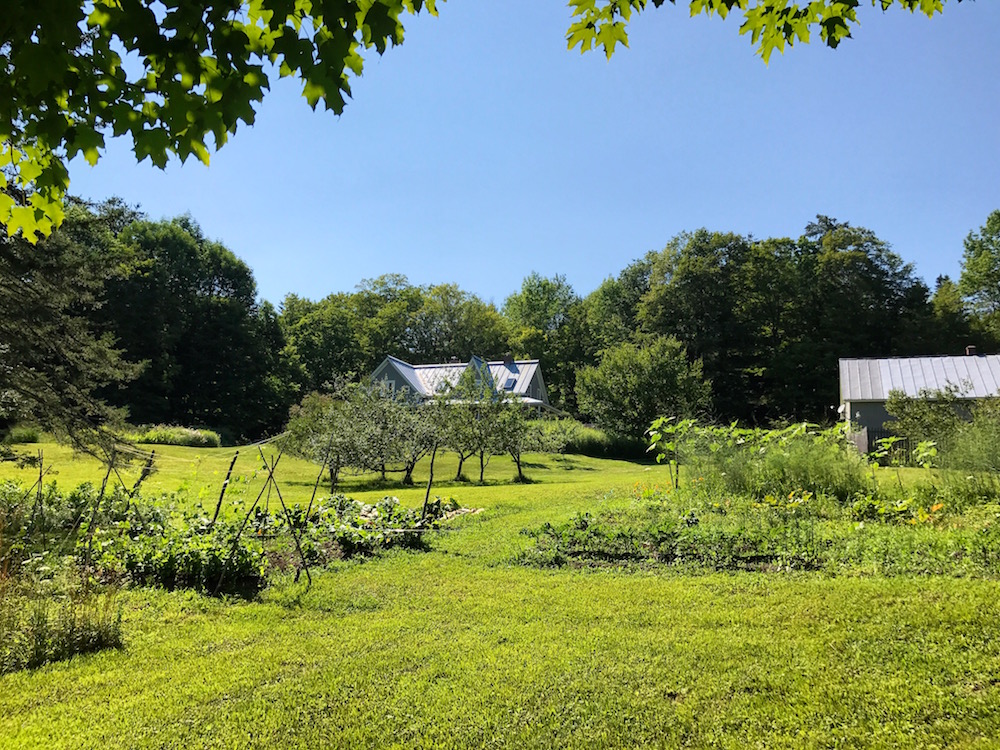 Two of our three garden beds

Given the length of this tending, and the constant weeding, mulching, and pest mitigation Mr. FW has conducted, finally enjoying the literal fruits of his labors is nothing short of exhilarating. The ironic thing about gardening is that you wait and wait and wait for things to grow and then, all of a sudden, everything ripens at once, inundating you with baskets of food. Depending on the quantity of the vegetable in question, we either consume it as it comes or preserve it for the future.

Since this is our second year here on the homestead, we’re still neophyte gardeners and novice preservationists, which is to say, we have no idea what we’re doing. It’s very much a learn-as-we-go proposition. However, this is part of the joy of our new life and we relish each new opportunity… except of course when we’re running around like maniacs trying to figure out what to do with 10,000 green beans.

Balancing homestead work with the other work of our lives is challenging at times, but it’s also a deeply rewarding aspect of living close to nature and in alignment with the seasons. We’re learning that each phase of life, each bloom of plant, each ripening of vegetable is a fleeting moment in time. Nature doesn’t wait around; it’s very much a seize-the-plant situation. 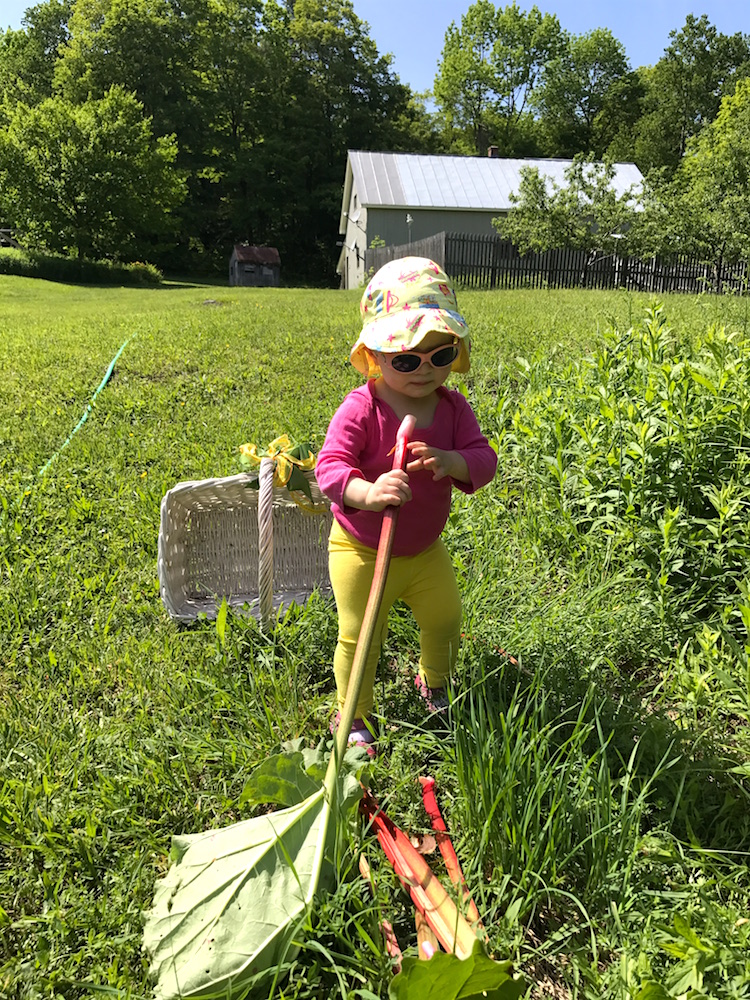 “Helping” with the rhubarb harvest

Ok “crops” is a bit of an overstatement for what we’ve grown since most of the quantities are just enough for us to consume… but you get the idea. Here’s a rundown of everything that grew on our land this year (or is still growing!) and what we did with it. 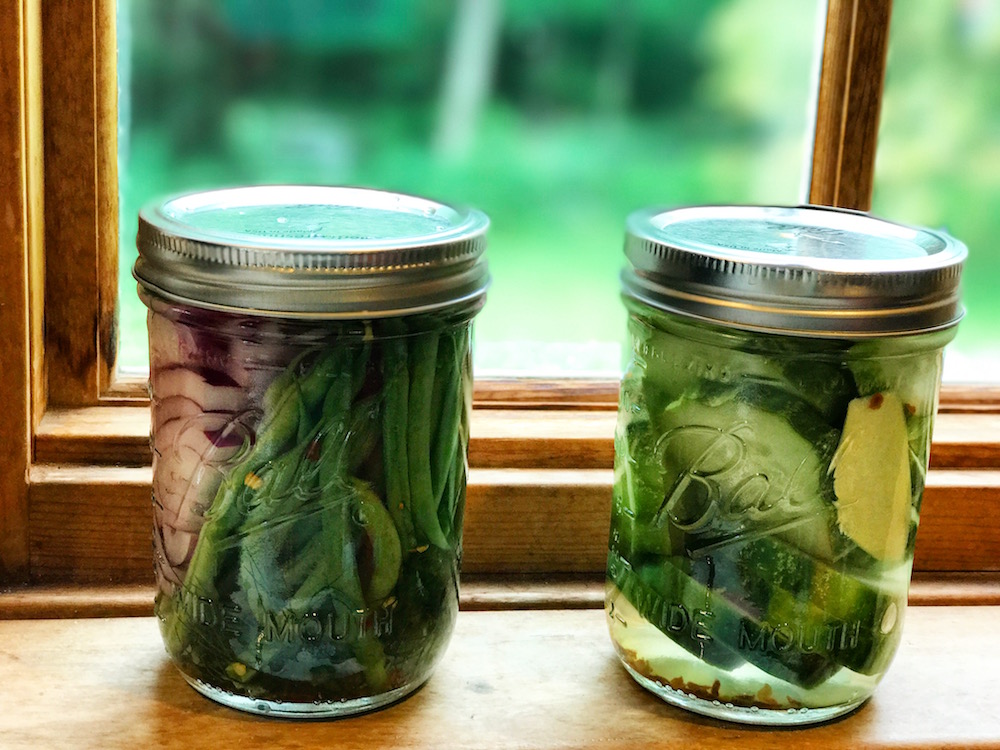 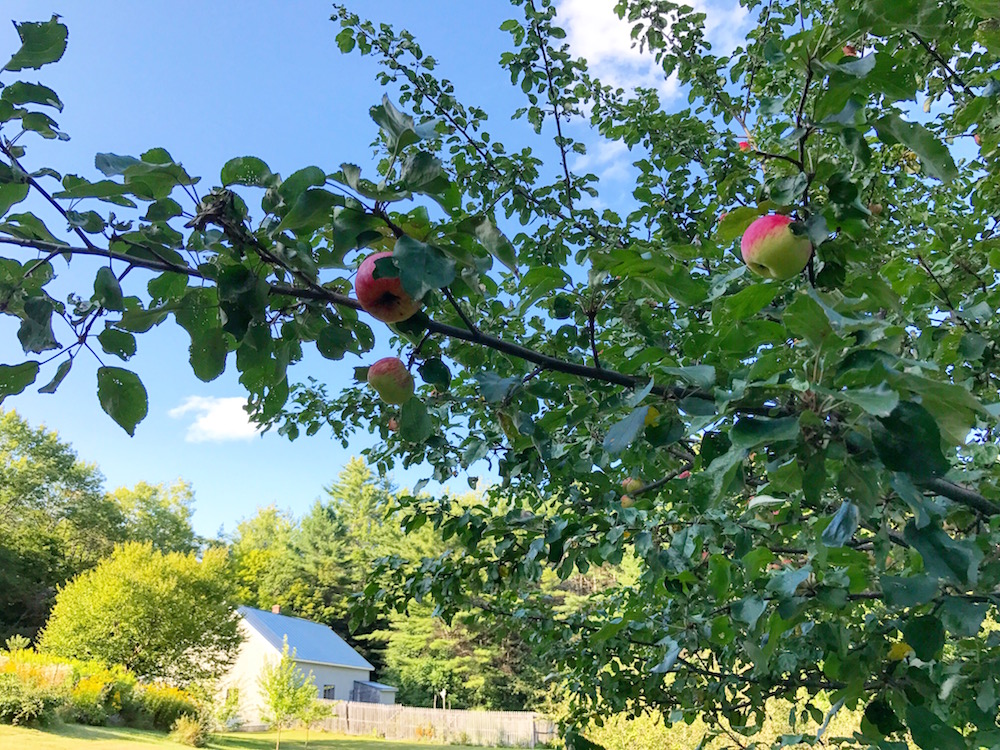 As you may have noted, we haven’t made any jams or jellies from our various fruits, due primarily to the fact that we don’t often eat jams or jellies. In future years, I may make jams to give as gifts, but for this year, our canned rhubarb compote, dried apples, and canned pickles will serve in that role.

Preparations For Next Year 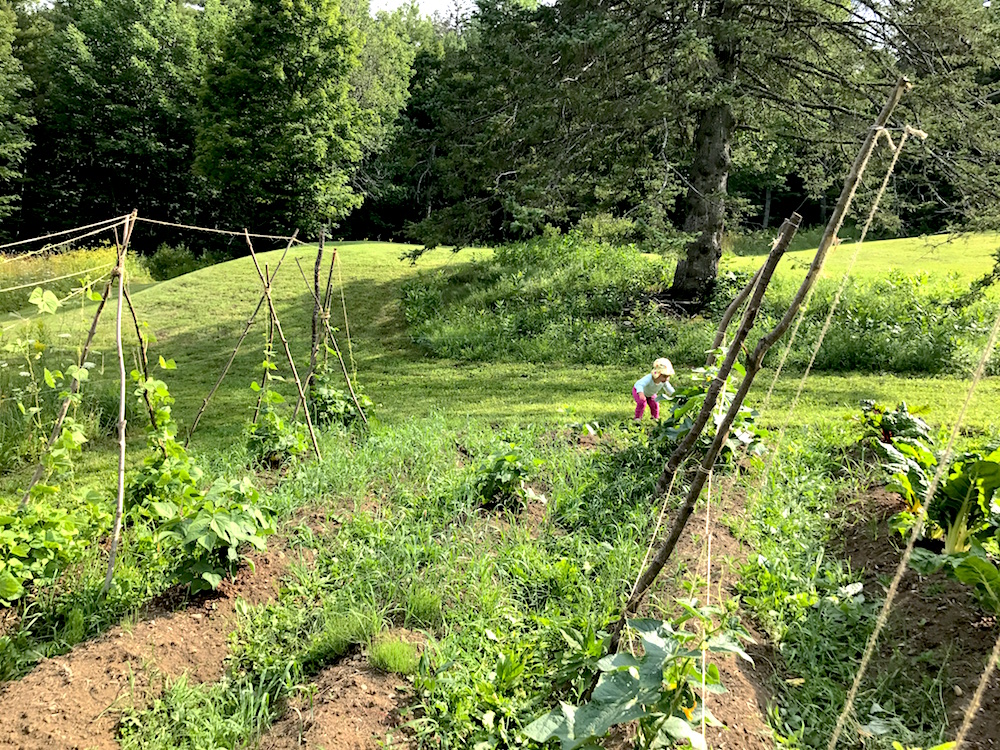 Babywoods scavenging beans from the garden

Late summer is also the time to–believe it or not–prepare for the next growing season! Mr. FW has had his eye on a derelict flower bed located to the right of our back porch with an idea to transform it into a perennial food bed, given its convenient location.

Our primary focus is on growing food–not flowers–so this plan got a vote of approval from the homestead planning committee (consisting of me and Mr. FW). To prepare this bed for planting next year, he first brush hogged it to the ground (using the tractor), then plowed the earth and finally, tilled it under. The final step is to sow a cover crop, such as buckwheat, until we can plant next season.

Mr. FW also brush hogged our upper field and lower field as well as several trails through the woods that are wide enough and flat enough to accommodate the tractor. Beating back this growth annually is important for any land that you want to keep cleared; otherwise, the forest will quickly overtake it and stamp out any semblance of trail. Most of our 66 acres are forested, which is how we like it, but it’s useful to have some cleared acreage. 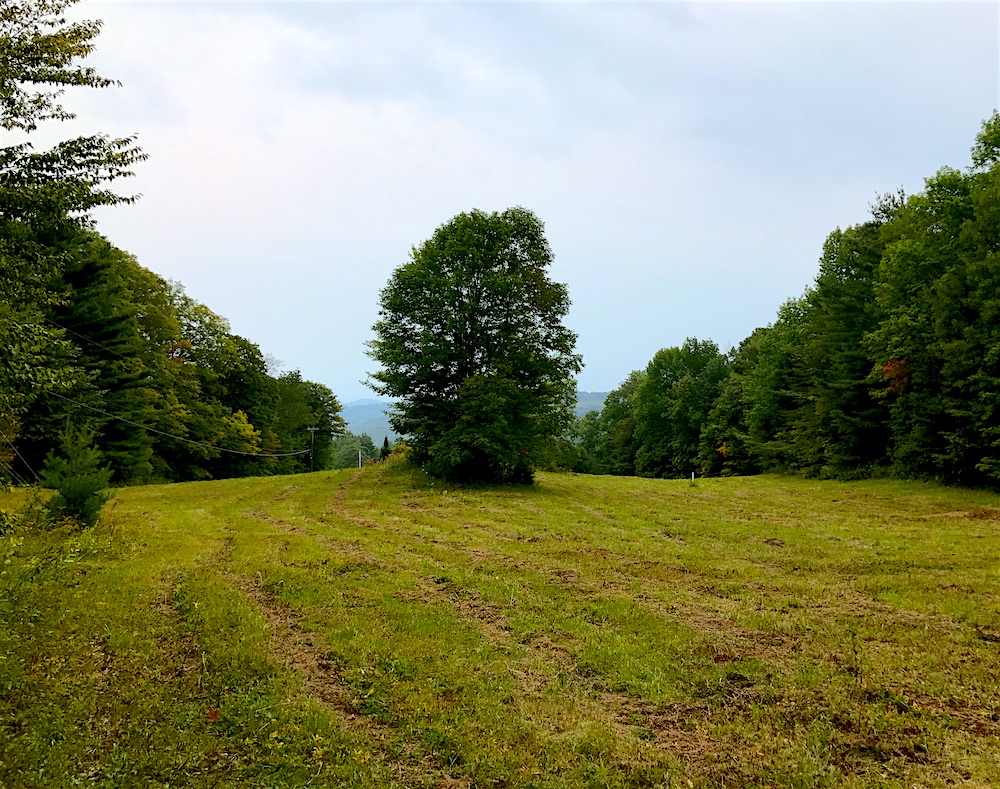 Part of our cleared upper field

It’s also true that initially clearing acreage from mature forest to bare earth is extraordinarily difficult and expensive. Hence, we aim to keep clear what’s already been cleared. We don’t have any immediate plans for our cleared upper field, but since it’s the only cleared land we have other than the two acres surrounding our house and barn, we work to keep it that way in light of the fact that cleared land can be a valuable asset.

How was August on your own personal homestead?